I was playing RAGE and there was this one mission I had to do. I already done a few missions and as I did them the town that I was at does not like strangers. For some reason, despite their hatred for strangers, they started to trust me. Once I saved the town from Bandits poisoning the well They liked me even more. What did I do to get all this praise? What about the other survivors I meet along the way? How would they know that this was all a ruse for them to trust me so I can betray them all? I know RAGE is not a moral heavy game. I just want to know why everyone is so trusting? 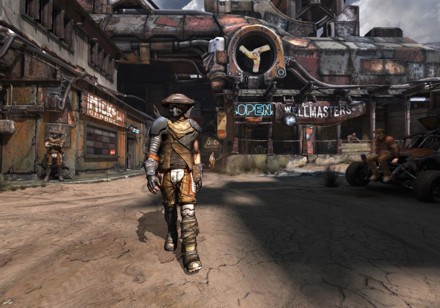 These are nice people, really.

While I felt like I did something good to the town. There should always be some doubters. People that will hate you not matter what. That one guy in the corner that should preach on how I'm just going to kill them all in the end. More moral heavy titles does the same thing. You do a good thing long enough and even if you turn bad, they will continue to like you.

In Deus Ex: Human Revolution you are walking around the small city block and you hear some people saying that they want to kill the next augmented person they see. This is of course not true. Even having small metal plates on my face they will do nothing. I can get why they don't want to start shooting up the street, but at least have them pointing you out as an augmented person.

I AM THE DESTROYER OF WORLDS

In Fallout 3 one of the first places you go is a settlement called Megaton. Right smack in the middle of the town is a nuke that never went off. The town will greet you with open arms and you will meet with the town's bartender, Moira Brown. After doing a few small quests here and there, you will meet another person who asks you to got to a hotel a few miles away from Megaton. You leave the town and head to the hotel wondering what he wanted. After meeting and talking to the man he will give you a choice. Either set off the nuke inside Megaton or walk away. It's an easy mission to skip. If you do choose to blow up Megaton you can watch the blast safely in the top of the hotel's building. If you walk away the man will get upset, but Megaton is fine and you walk away not ever talking about the exchange again.

If you do happen to chose to blow up Megaton when you return to the town there is only one survivor, Moira Brown. She's now a mutant though. Despite all this she still has that upbeat attitude. She just simply laughs off of what happened and ask you to do a quest for her. Not only that but she embraces on what just happened. She welcomes you back with open arms again never suspecting that this stranger she met just game days ago would destroy her entire life. She should be cautious. A mysterious man shows up and a few days later the nuke goes off? That should have alarm bells ringing all over the place. Even though she's a mutant, her home, work, friends, and family is gone the nuke is never talked about again. Just a faded memory that no one will ever talk about. Your Karma is down, but after a few good deeds it will just rise to it's original position as if you never nuked Megaton. Everyone will act like everything you did that was bad never happened. It's far too easy to be neutral in Fallout 3.

Any game that has a moral mechanic seems to fall for this trap. Except inFamous. inFamous is a Playstation 3 game on which your moral choices actually matter. Everyone hates you at first. Mainly because you are the cause for all this destruction and chaos. Will you stay the villain or will you become the hero?

In the game you are given countless choices. Do you save the people or let them die? Do you share the food or take it all to yourself? The best thing about inFamous is that people will remember what you did. The more you do good the more people will like you. The more you do evil, the more people will turn hostel. They will even throw rocks at you. What makes inFamous different that no matter how good you are there will be people that will not trust you. There is even a guy that shows up, on full FMV no less, telling everyone bow bad you are, even though all you have been doing is helping the people with there problems and clearing out the block full of gangs.

The inFamous Paradox refers to a game where no matter what you do, good or evil, people will love you for it. The game sets you off as neutral it's your "job" to make the people love you or hate you. The inFamous is not only for random NPCs. It can also refer to your companions as well.

In Dragon Age: Origins you would need to keep your team happy. By doing this you would need to either agree with them or give them gifts. Each character has a scale on how much they trust you. If they don't improve of you or your actions they will leave you for good. I'm not sure on Hard, but on easy (I'm not used to that type of gameplay) no matter what you did the group stays. It's hard for someone in your group to leave. The bar moves slightly towards hate, but if you did something they like the bar will movie towards Like. Even if you did not realize it or not. it does not matter what you do when it comes the the interaction of characters.

If developers wants us to feel like we've accomplished something, they need to make sure that the actions of you is accountable. Each character should either love you or hate you. Morrigan should not be neutral when you first get her as a companion as she scowls at you in almost every cutscene. She should hate you and you try to build her trust. They should take the cues from inFamous, even after beating the game and have 100% good there are still some people that will throws rocks at you.
Login to vote this up!