Location: Return to the horror

There have been several locations in recent years that are worthy of mentioning. There are for example batshit crazy Hell in Shadows of the Damned and Borderland's Pandora. Of course Rapture comes to mind, as well. And not to forget the Minecraft world. Further there are AC Brotherhood's Roma and most recent Skyrim but the one location in the last few years that had the most impact on me was the USG Ishimura in Deadspace 2.

It's been three years since shit hit the fan on the Ishimura and protagonist Isaac Clarke found himself in Deadspace 1 battling the Necromorphs. Now he finds himself on the gigantic space station The Sprawl (Revuhlooshun wrote something about it, go read it) in a fight for survival. When you get to Chapter 10 � the Ishimura � , he has already been betrayed, shot at, pursued by gigantic alien monstrosities, met the annoyingly well-crafted Stalkers and frickin' exploding babies. Also, he found companions and is on his way out with some kind of tram. Of course there happens stuff and the way gets blocked. Fortunately the needed gravity tether is near, unfortunately it is on board of docked Planet Cracker USG Ishimura.
As many of you will be very aware, the Ishimura is the location where most of Deadspace 1 took place and it is not a nice place. Whole crew got crazy, slaughtered, turned into Necromorphs, that stuff, and Isaac � the player � right in the middle. 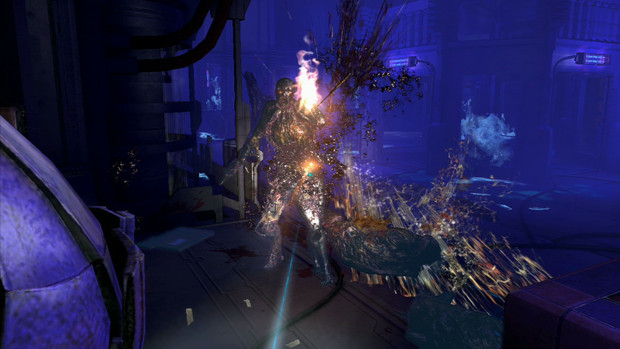 "At, least you don't have to go through the Medical deck." � "Welcome to the Medical Deck."

There another nice surprise was waiting for me. The whole place was only dimly lit by UV light which revealed � finally � blood everywhere. Messages written in blood and general bloodiness were glowing on walls and floors.
Though graphically and atmospherically impressive and "pleasing" at this point the chapter got more like a normal Deadspace 2 level. The first half or so was what made this chapter so great, though.

The Ishimura was just a place, a level in a videogame but the notion of it sufficed to put horrible thoughts and expectations in my head which were perfectly reinforced by the opposite nature that greeted me when venturing into the ship. Only because I experienced constant dread in this location before in another game. The mere mention of entering the Planet Cracker again was enough to make me feel unwell, in a good way ultimately.
For me it was the most clever designed location in the last few years, dickmove and masterstroke in one.
#OpinionEditorial
Login to vote this up!