2:02 PM on 01.20.2012 (server time)    0
This is a blog in response to Altum Videtur's blog. which was in turn was a response to my blog here. Feel free to ignore this or even better, pull up a seat and grab a plate...theres enough gamer indignation for everyone!

When I saw your post the first thing I could think of was this old XKCD gem:

I see that like mine, your inner hardcore gamer is alive and well. But like the ancient saying goes: If you see your inner gamer on the road, frag him. I appreciate that you felt moved enough by my blog to make an impassioned response, but I feel like I've been misunderstood on a few points, so allow me to clarify.

You make an excellent point that the very reasons that Citizen Kane was so groundbreaking and celebrated was the fact that it opened people's eyes to the vast possibilities and techniques that film was truly capable of. And while it is true that in order gaming to have it own watershed �Citizen Kane� masterpiece, it must go forth and blaze it's own path to fully realize the greatness of the medium. I contend that that's not really what most games are trying to accomplish�and thats okay too.

As I said, then you said, and I'm saying again (down the rabbit hole we goooo), �game designers continuing insistence on aping Hollywood narrative structure necessitates more truncated campaigns in order to better serve the story's pace� is generally the default approach game design today. This is in major part because of the very fact that Gaming is such a fledgling medium. Movies are like the big brother that videogames look up to and aspire to be, so we shouldn't be surprised when we see games trying on it's older brother's clothes; pants hanging around it's knees, shirt dragging on the floor, with a hat so big it looks more like a helmet. Sure, he does bear a strong resemblance to his elder sibling, but games cannot and will not grow up to fill the same job. But can you blame the kid? The interactive entertainment medium is a vast unplowed field with near-limitless potential...It's more than a little daunting. Hell if I was him I'd stick with what I knew too.

Gaming's awkward teen years...we try not to talk about it.


The part where I think I've been most misunderstood is this: I'm by no means suggesting that there should be �an arbitrary limit borne solely out of monetary and market concerns.� In actuality, my entire point was that games should be RELEASED from the artificial and arbitrary boundaries of length that they are forced to conform to.

Now think, who could possibly be the ones forcing conformity on the industry to fit very specific ideals and mores? I hate to break it to you, but its us. The greater gaming culture has got to shoulder most of the blame here. For the past 20 years, we have been insistent in our demands of how much �game� is acceptable for our money. If theres a game we feel should be ten hours instead of five, or 20 instead of 10, boy, are they going to hear about it. This is the kind of culture that cultures an industry environment where it's tack on � identical corridors and hobbling back and forth across the same barren, static landscape filler� to meet the acceptable game length quota as decreed by us, the fans.

If a game is structured like a film, is written like a film, and is paced like a film, why the hell can't it be as long as one too? For far too long designers have been coerced into to stuffing ten pounds of game into a five pound story, and it's really not enjoyable to any of the parties involved. Theres a cardinal rule of storytelling that each time you insert a scene you make sure it has a purpose. If it does not either move forward the plot, or convey an important aspect of a character, you cut it out. I believe the same approach can be beneficially applied to games. If it ain't fun, and it's not moving the story along, cut it the hell out.

This is an example that is quite easy to see in movies. Films that are excessively long often lack directorial and creative oversight. Ever see the directors cut of a movie with added scenes? While a lot of times those scenes are cool...most of the time you see why they were cut out. I don't care if a game is 10 mintues long or 100 hours, one should always be mindful of proper pacing.

That's not to say games should be any shorter AS LONG AS THEY HAVE SOMETHING TO SAY. This is something I absolutely love about Mass Effect. Every side mission, every encounter, every conversation is an opportunity to shape and define Shepard and her mythos. There are very, very few games that are that dense with meaning and purpose.

I rather liked your analogy that many games are structured like books, with very long narrative arcs, gently guiding the player throughout the ebb and flow of the story. Like I said before, if it walks like a book, talks like a book, and acts like one too, let it be a damn book. Modern games should be released from their shackles of public opinion, and allowed to be whatever it is they goddamn want to be. There's a great big wonderful world out there, and theres room in it for games of all sizes: the five second facebook games, the 2-8 hour �movie narrative�, the 15-25 hour �average experience�, and the 40+ hour Skyrim-esque marriage destroyers.

Gamers aren't the only ones to blame for putting pressure on designers though. A super important part of this entire discussion (which is my fault for not stressing strongly enough in the first blog) is the problem with standardized game prices that the �powers that be� vehemently refuse to budge on. Games have pretty much always cost in the $50-$70 range, and this is a huge issue that stifles both designer freedom and creativity.

Let's say a designer has the idea for a game. It could be the bestest game that ever was. Great story, fun, engaging gameplay, incredible setpeices...but it's only six hours long. Ruh roh. We've got a problem Scooby! Why? Because if you release this awesome game as is, your bosses are going to insist that there's a $59.99 price tag on the outside. Of course this is going to make gamers pitch a fit, flamewars will be declared, and the there may be talk of a boycott. So there goes option 1. Option 2 is to try to cobble together a poorly planned and implemented multiplayer mode in order to placate the mobs.(I'm looking at you, Bioshock 2.) Option 3 is the one that seems to be hated the least, and therefore everyone uses: Filler! A.K.A. out of place RPG elements, pointless fetch quests, and endless backtracking. 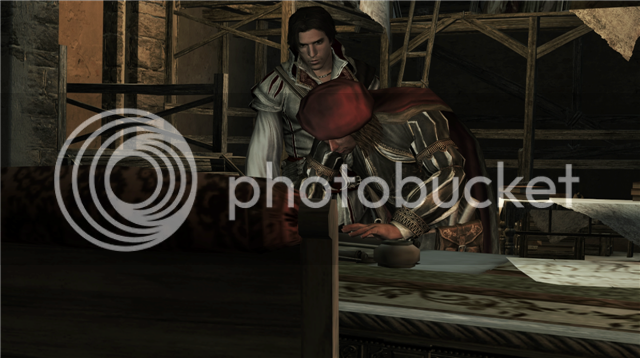 Yet another codex page? Dammit I just want to learn about the Templars!...and maybe stab them. alot.

Games so often lack the strong, singular vision of films who have directors. Sure, every now and then you have an El Shaddai, Ico, or Killer 7, but instances of the Molyneux's, Levine's, and Miyamoto's are few and far between. And this is the way it's always going to be, until the incredibly stubborn �powers" say otherwise.

A quick thing on what I said about difficulties. Quite simply, this is an old, personal holdover from my 80's gamer pedigree, so feel free to chalk that one up to personal preference. But! It is still hard to argue that games are not laughably easy nowadays. A large part of that has to do with the ever present issue of low game completion. I actually cited that CNN article not to suggest that gamers are lazy, fickle, and sometimes have the attention spans of ferrets on adderall(which they do) but instead to point out the problem of the aging gamer. Quite simply, none of us are getting any younger. Studies are actually reporting that the �average� gamer is well into his 30's. Taking normal adult responsibilities into account, and also considering the war for our free time that's being waged by our ever connected world, it's almost impossible for the �average� gamer to burn through games like he used to�disposable income be damned.

The request for shorter games is not only a design suggestion, but a plea: for the love of God, make shorter games so that your audience has time to play them! This is problem that backlogs come from, this is the climate that creates the need for places like the backloggery, this is the reason why the industry loses people who are still in love with the medium, but eventually fall by the wayside before quitting altogether. And it Makes.No.Sense.

Here we are with games that are artificially long, created by developers using cheap lenghening tactics they don't want to use, to be sold to people who don't have time to play them in the first place. This my friends, is the definition of insanity and a deeply broken industry.

This is about as sad as seeing two people wait for five dates and play various mind games on each other because �that's what you're supposed to do.� But in reality, they just want to go home and fuck. Yo, Games Industry! You know I want it, I know you want it, so why can't we just cut the bullshit and get it on?
Login to vote this up!