12:25 AM on 01.20.2012 (server time)    0
Oh my, those last two bits I've written were awfully dry, weren't they? I mean, this is still going to be a totally srs blog about totally srs things - I'm completely starved for good topics and then a blog gets written and I don't agree with some parts and that's totally not how it works and my god I can't just let this sit here and THESE WRONGS MUST BE RIGHTED - but I'll try my best. A dick joke in the title's a good a start as any, right? (As this post is a direct response to the blog linked below, I'll assume you've glanced over that article's finer points, or maybe even read the whole thing if you're a super cool person)

I'm honestly a bit hesitant to strap on my high-brow argue-boots and stomp around the well-worn "what game length is best length" Astroturf, making only a few more insignificant marks among the hundreds of much more comprehensive and well-stated opinion-prints, but as much as I may want to issue a bunch of half-hearted excuse-mes and I-know-you've-heard-this-before acknowledgements in what is no way a means to try and not write a proper intro paragraph, I can't help but lay down the wholly subjective law on something as crucially fundamental to game design as the amount of time a player is intended to be enraptured in front of the glowing screen. Fortunately, kona, in his nice little essay on this very subject, has given me a wonderful set of points to counter and work off of, making the part where I organize my thoughts much simpler and straightforward. Thanks, man!

As noted, games these days do seem to be a lot shorter than in the past. As noted, a significant contributor to this trend is how much useless, redundant, cumbersome, and/or repetitive ass-poo is being excised as our standards rise and our technology advances. As noted, game designer's continuing insistence on aping Hollywood narrative structure necessitates more truncated campaigns in order to better serve the story's pace. This is fine. "Length" in and of itself means little when that extra time is spent trudging through identical corridors and hobbling back and forth across the same barren, static landscape - "filler," as it is often referred to in modern parlance.

What grabbed my attention, though, was this little sentence - "Quite simply, if games are to truly make the next step and finally offer up our 'Citizen Kane,' there needs to be more care put into storytelling." I could write a whole article on this notion - I probably will on another slow week - but the next assertion, detailing how shorter games would more easily accomplish this, I just can't accept. The thing about Citizen Kane - why film critics adore it as frequently and vigorously as young viewers (like myself) wonder what the hoopla is for - is that it's not simply a good story, but that it's a brilliant film, taking advantage of the medium's unique qualities to craft a means of portraying Kane's meteoric rise and decaying soul that you simply can't do any other way. 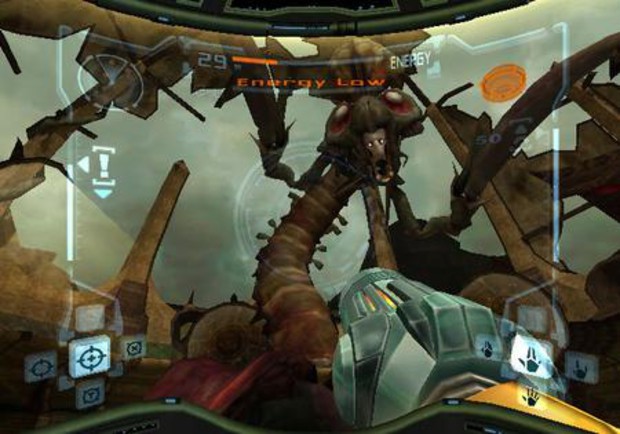 Then there's this little bit - it's mentioned that older games used to be harder, and were thus "lengthier" not because they were filled with more content (however repetitive and bland) but because when you played one of those games, you died. A lot. In many ways. Then you ran out of lives, and then you had to start the whole level -if not the whole game - over from the beginning. Difficulty is an equally important and fundamental limb of a game's anatomy that I'll try not to lovingly caress and dissect in this piece, but the go-miss-restart-go-miss-restart-go-miss-restart-oh-suck-it-game mentality has faded away because it's an incredibly frustrating way to play a game; a tenacious little leech of a hold-over from the arcade days where the objective of the designer was to prevent you from finishing it so you'd feed the machine more coins and allow the greasy pizza shop owner to buy himself a prostitute and a new bottle of shampoo. In a time where challenge was quite literally the only incentive to continually play a game, that was okay; but in this modern era, when developers actually want a person to experience everything their game has to offer, intense difficulty (primarily as a means of extending a game's length, that is) is a design choice equally as lazy and artificial as tossing in four context-less fetch quests in a game's second act.

Kona concedes in the last paragraph that the Skyrims and Mass Effects are fine and deserve their place, and likewise, there are plenty of people who take the very things I've lamented above and make shining gems out of them, from Uncharted's captivating nods to adventure films to Super Meat Boy's gleeful delight in making the player hate everyone and everything around them, but thing about each of these games is that they don't really seem to think about length. They know what they're doing, and they do just that, adding as much as they need - no more, certainly, but also no less. VVVVVV, agonizingly frustrating as it may be, remains engrossing not because it makes me want to punch several holes through my monitor, take a sledgehammer to my computer, burn all the little pieces in molten lava, and then buy another so I can do the same thing all over again, but because it's varied and creative level design means I'm constantly encountering new surprises and twists on its simple base mechanics. Portal kicks butt despite its short length because it chooses to feature only two (okay, three and a half) characters and deliver them over a focused arc, while Red Dead Redemption, mentioned above, includes loads and loads of colorful individuals, painting a narrative tapestry that's necessarily longer but all the more detailed and captivating for it. Neither is wrong, and neither is right; neither is the "way" to do it, and neither is the "way" not to do it.

And yet, writing off these longer games either because the majority of people don't have the time or patience or because of some rose-tinted longing for the past is, I say again, a painfully arbitrary and stifling limit on the creative potential of the medium. Imagine what'd happen if they tried cutting out more from the film adaptation of The Lord of the Rings because movies aren't "supposed" to be two and a half hours long. Madness.

(Okay, yeah, you could've gotten rid of Aragon's elf lady; seriously what was that all about)
#ShareonCommunityBlogs
Login to vote this up!