Mobility: Kairosoft is my Addiction 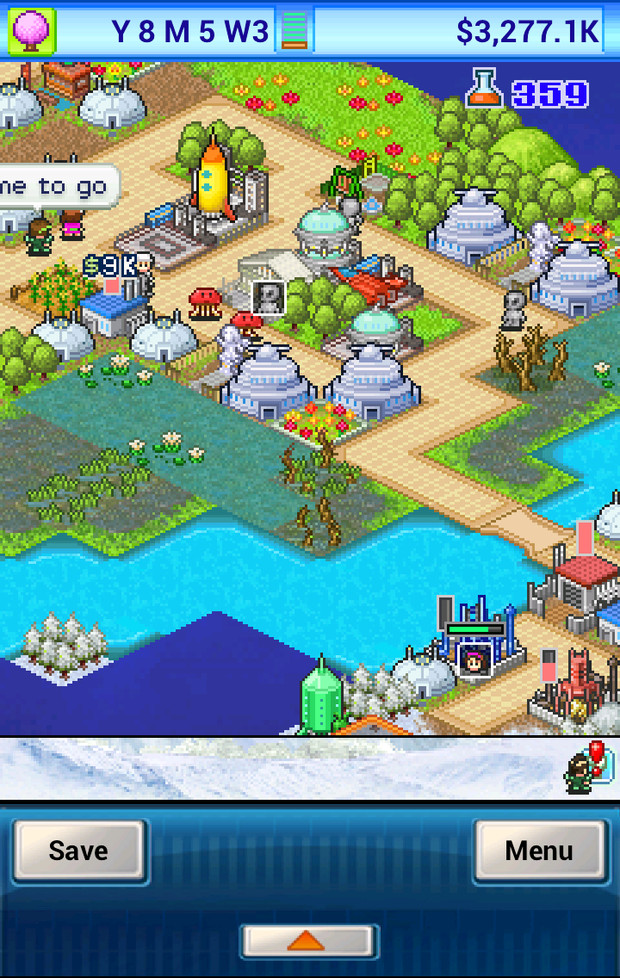 One of their most recent games has the word salad title of "Epic Astro Story" (to be called EAS from here on in). And while I haven't hit the game's time limit yet (and they're at least considerate enough to tell you of the time limit ahead of time), I've been enjoying EAS so far. Tired of focusing on one static layout, the dev decided to take on Sim City (or more accurately, Sim Town)... and set it IN SPACE. The space setting allowed the dev to make some interesting choices. For instance, you start out with only a small area of land and have to send your residents to explore new lands to find places to build. Frequently, on your explorations, you'll find monsters that you'll have to battle. Tourism comes in the form of other races, who seem to find their home planets ravaged by pirates all too frequently and are all too willing to spend 30,000 space-bucks on a TV while visiting.

Wait, did I mention battles? Yes, I did. Somewhere along the line, the devs (who hail from Japan) realized that all that number crunching that was in their sims seemed to overlap with the RPGs of their youth. So, each of your settlers have a Health stat (for HP) and an ability stat (supposed to modify how a particular weapon boosts attack). You can research new weapons and armor for your gang to bring into battle. Each settler has their own unique skill which can be leveled up or even exchanged for a new skill. And while both sides essentially just auto-attack, using their skills as the skill dictates, you do get to set up formations before battle begins. It adds a fun dynamic, and also functions as a roadblock to prevent you from expanding out too far too soon.

Weirdly enough, though, I don't see them getting much press anymore, like they did when Game Dev Story came out. I had to find out about EAS on my own, just searching their games in the market. It's like the gaming press (and come to think of it, most big corporations when they consider developing an app) just treats Android as a second-class citizen, which is weird considering the latest Neilsen report shows that it still holds the title of most prolific smartphone OS out there. And it's a little sad that just because Kairosoft has started doing Android versions first, they get shunned. They don't deserve that, since I've yet to see these guys do anything wrong.
#OpinionEditorial
Login to vote this up!

So, what's there to know about me? I'm Dave. I'm currently unemployed. I love baseball (huge Mets fan), but I don't like sports games. I've lived a crazy life. As far as taste in games go, I'm quite varied, playing anything on my Wii, DS, or 360 except for the previous mentioned sports games. I still have my SNES, though, and happily indulge in a bit of Retro-goodness every now-and-then (mostly Earthbound, but I still also have my copies of SMRPG, Super Mario Kart, Link to the Past, and Kirby Super Star). And... that's the main things.

...Also, I like to play Magic: the Gathering, in case the banner didn't tip you off (the faux-card in the banner was made with Magic Set Editor, by the way). Been playing for almost 7 years now, though I'm on a break from the game due to... budget reasons.

If this intro seems brief, you should try meeting me... I've been known to listen more than talk.

A fun sketch based on my name, courtesy of Fangamer's OfficeCam:

Even more recently, I got into making Let's Plays. Check me out here and maybe subscribe if you like what you see?