If your a gamer who spends time on the internet, then I think you know the story about Nintendo and Sega. I've been thinking a lot about these two companies lately and how much they differ from other gaming companies especially in this day and age with the 360, PS3, PC and mobile gaming taking over the industry. Now I'm not saying Nintendo is losing the battle or DOOOOOOMED, but in terms of survival, they are on the boundary line trying to squeeze in. Now your probably asking me, "Hey! What the hell does Sega have to do with this, They had their shot and they blew it!" Well that may be and with the chances of say a Dreamcast 2 next to impossible and especially with how there is not much room in the market for another console, I've arrived to this conclusion (which people might have already thought about but here it is...), what if Nintendo and Sega merged! 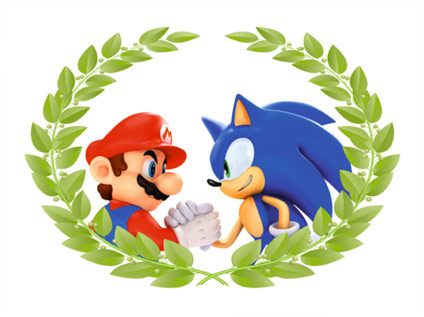 Now with this idea in mind, let's go over how this will all work out shall we? First off we're not really dealing with the same Sega, not the one's way back then and this may be true. However! I believe Sega still has talent in them, with sonic the hedgehog gradually recovering with some interesting outings, some awesome franchises like Yakuza, Valkyria Chronicles, and what not, I think their doing just fine. Next, and what may be the bigger question, WHY!? I think out of all the companies Nintendo gets along with, I think they get along with Sega the most (just look at the M&S Olympic Series). Probably the most Important question is how this will affect them making their software. If anything It can only get better, increase in talent if anything, that and their can be really cool crossovers especially in games like smash bros where we can put Sega characters and themes in the games.

On Nintendo's part maybe they can give Sega a hand in handling more of their franchises like super monkeyball and nIGHTS, vice versa with Sega working on games like F-zero or Warioware. Not only are just Nintendo and Sega working together but maybe they can attract more companies to make games for them like Platinum, Prope etc. Hell maybe that Mario and Sonic crossover platformer everyone wants may come true. another suggestion could be Sega giving a hand with Nintendo on making consoles. One more thing to consider is just how well can they perform against the other console competitors, well even I don't know that one and I could assume the worst where the two companies would not get along and get in each others way to the point where they fail.

There's probably more in my mind but that's the gist of it. Now I'm not saying that they should do this, Im really just saying how Friggin Awesome it would be if they did it. If Nintendo is the heart of gaming then Sega is the soul, and both companies are the only ones (that made consoles) that are pure gaming companies. That is all there is to say and that was just something I felt like sharing. thank you for your time, comment if you like and I promise next blog I'll make more of an ass of myself. lades!
#ShareonCommunityBlogs
Login to vote this up!