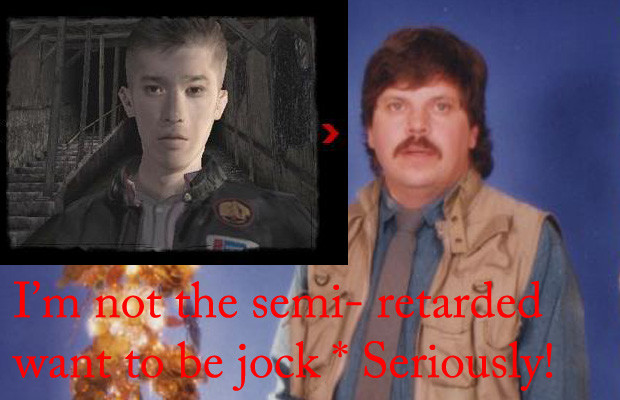 The game seems like it had noble and ambitious intents but most of it’s execution is either hit or miss, the game controls very survival horror like , kind of like Silent Hill 4 : The room. I’m not sure if it’s because I’m playing it with a ps3 controller or what but the first person aiming sensitivity is insanely high, I was forced to spray two magazines on a zombie just to hit him to complete the tutorial. Then there’s the interesting mechanic that is called sight-jack ( not to be confused with the horrible mind-jack game ). It allows you to see trough the eyes of nearby enemies and makes for some tense moments but the white noise sound it makes when searching for an an enemies vision is kind pretty high pitched and overly annoying , high and annoying doesn’t make it scarier , just more painful to execute, which will eventually get to you as the game seems intent at using it pretty often.

I did however get to one interesting scenario where you got to control a guy with very bad eye-sigh, and to get around you sight jacked his dog that followed him around to see better. But when I later discovered that all of this sneaking and sight-jacking wasn’t really necessary because I could just outrun the zombies and sprint to the exit like some kind of suicidal bat it felt kind of unnecessary. I mean why bother putting effort into building this elaborate maze and emphasising on stealth when players can just sprint trough it? Didn’t they test this thing? I hope it get's better later on!

Another daunting thing is the overly complicated menus, I mean I’m all for the depth that comes with context sensitive moves and a plethora of maneuvers but here it’s pretty poorly executed so you’ll constantly be re-visiting the guides on how to use all of your abilities and what combination of buttons did what. It’s pretty strange really , it’s like it was intended for a keyboard and mouse setup with all of it’s functions and stuff. I do however enjoy the intent of more options and advanced techniques but not when I have to go back and read tutorials because they don’t make sense.

I will probably finish it just because it entertains me in the “ what is going on!? what the hell is that?! Why is that kid running around with baseball-bat that looks like a penis” kind of sense, and like I said , I’m a sucker for horror games. So keep that in mind if you happen to find this weird gem, but then again it will probably cost close to nothing so pick it up and enjoy it’s convoluted controls and strangeness!

Also -- Super Metroid for the genesis * orgasm *
#ShareonCommunityBlogs
Login to vote this up!