Sometimes the mere mentioning that a game had RPG elements was enough to shelf the idea to bring it over. You're going to see me pulling this excuse a lot because for every Mega Man, Castlevania, TMNT, Mario, Zelda, and whatever title that came out, you'd have a dozen or so RPGs that didn't quite make it. While this happened less with the SNES, it certainly happened a LOT with the NES. For example...

Chronicle of the Radia War

If you've never seen or heard of this game, I'm not surprised. Also, you should immediately check it out. No really, go. Minimize this window, go check it out, and come back. You back? Awesome, right? You're welcome. Chronicle of the Radia War is a story about...well, I don't remember and it doesn't matter. Here's what you need to know about CotRW. It's an action/RPG with random encounters that feels similar to Final Fantasy Adventure, but made by Tecmo and therefore has awesome music, animations, sound effects, and so on.

The only major gripe I can make about the game is movement speed is very slow. Beyond that, it's fun, tough, and highly enjoyable. So why didn't it come to America? Action/RPG. Sure, it's pretty heavy on the action, but come on. It's still an RPG. For those of you that don't get it, consider this. I have two stepbrothers. These guys were big into sports and also enjoyed action games on the NES from time to time.

So games like Contra, Ninja Gaiden, Burai Fighter, Castlevania, and various others were immediately recognizable to them. There was one day I brought over Robotrek, hoping they'd play it. I toted it as being a game about robots. As soon as they saw it was turn based, they stopped watching. I got Chrono Trigger one Christmas. They liked the music and graphics, but recognized it as an RPG immediately and didn't give it a second thought.

Granted, Robotrek isn't exactly the best RPG ever, but to see easily and readily dismiss CT? Every so often they'd look up and see the incredible visuals, then go back to doing whatever they were doing. I couldn't believe it then and I still can't now. Unfortunately, that's the way most of the American audience of gamers were back in the day. Therefore, the next game couldn't possibly have made it here... 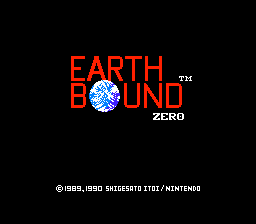 Look, every Mother/Earthbound fan out there can blow me. And no, it's not because I don't like the Mother/Earthbound series (because I really, really fucking love it, actually). "Ooooh, why didn't Mother 1 and 3 ever come to America? It doesn't make sense!" YES IT DOES. Mother 3 didn't come out to America because there's an implied rape scene where Lucas allegedly gets his cornhole tonguepunched by a transvestite in a hot spring...you know, to learn psychic powers or whatever, because LOGIC.

Look, we have the Rocky Horror Picture Show, but I highly doubt anyone wants to see that in an RPG, especially one that's cartoony and has the appearance that it's made for children (inb4 South Park reference). Second, the original Mother was slow, tough, even stranger than Earthbound at times, AND WAS AN RPG ON THE NES. I think if you're really reaching you could claim there were 10 American NES RPGs made and that's it.

Remember, this was a time when games like Contra and Castlevania were kings and even the mere mentioning of Final Fantasy or Dragon Warrior could get your ass kicked. The 80s and 90s were a brutal time for RPGs even after we entered the more accepting PS1 era. And again, I love the Mother/Earthbound series, but the more bizarre games often took a backseat to balls to the wall action titles.

It made sense, especially considering the NES was mostly about platforming and action games. That's not to say there WEREN'T RPGs, but again, they weren't popular. They just fucking weren't. What IS strange, however, is when a truly fucking awesome RPG doesn't come out to America. You know, such as...

This game rules, but sadly I've barely played it. What usually ends up happening is I download it at the same time as other great RPGs that are easier to stay focused on and this ends up getting shelved. Even now I have it downloaded, but I haven't even verified it actually works. This is an SRPG with dragons, dragon riding, floating islands, and all kinds of awesome 90s Squaresoft goodness.

It has incredible graphics and animation, great music, and all kinds of great concepts like feeding your dragon random stuff to make them evolve. Okay, that might be about it. Really, I wouldn't know because I haven't played it much, but what I have played is great. With this one I really only have one guess as to why it may not have come out: turn-based SRPG. And I know what you're thinking..."Wha, noooooo...come on, we loved the shit out of games like Final Fantasy Tactics, Disgaea, and all that. That can't be right."

Name me one turn-based SRPG on the SNES that came to America that you love. Any takers? Anyone? Unless you bounce into the territory of Koei strategy games and claim that "well hey they're RPGs too" as an exception, there really weren't any, were there? Sure, Front Mission, but that never came to America. Neither did Fire Emblem. Now, Ogre Battle did, but it's slightly different from what I'm talking about.

Also, Tactics Ogre didn't. I can't think of even ONE American SNES turn-based SRPG set in the vein of an overhead or isometric view right off the top of my head. Not one. And again, I'm going to fall back on RPGs still not really doing that well, so adding strategy to the mix certainly would not have helped things. In this episode all three games really didn't have a solid reason for not hitting American soil other than...well, just being RPGs. Sadly, all three still have yet to officially hit American soil, forcing us to import or emulate for these experiences. Even sadder is that still today we are being denied great RPGs for seemingly no reason. Anymore, unless sales were terrible, I honestly cannot think of any reason to NOT bring an RPG over to American shores.
#ShareonCommunityBlogs
Login to vote this up!