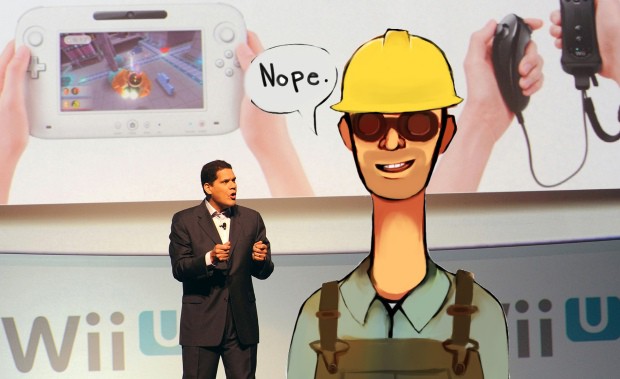 Nintendo disclaimer: when I talk about major platform holders in this context, I mean Microsoft and Sony. Nintendo will be showing something related to the Wii U, but I don't care. First off, they already announced it, and what they showed was a load. When they announced the Gamecube and Wii, I was like �Oh...hmm... well, they are Nintendo, I'm sure they know what they're doing�. After seeing the Wii U so far I'm not extending them that credit this go-round. I'll gladly watch Nintendo's keynote at E3 2012, but I won't be expecting inspiration or excitement � I'll be waiting for the Wii U to have its �Wii music demo� moment, or to have its �Bullshit renders later proved to be bullshit� incident. Call me a hater if you want, but I grew up a Nintendo kid and nothing would please me more than a return to relevancy for the once mighty �N�, I just can't look at the Wii U and picture that future.

E3 2012 is shaping up to be a train-wreck. Seeing a keynote train-wreck is my second favourite thing to seeing a raft of exciting announcements and new hardware detail. Because I don't think we can expect the later, we better get some popcorn and get ready to watch the fail-pile.