Sometimes a game is deemed "too weird" to come to American soil. This doesn't happen all the time and usually when it does, it's for good reason. I mean, I guess so. I've decided to include youtube embeds on all the game pictures this time. Aren't I such a nice guy?! All three of the games highlighted here definitely have their quirks, but should still definitely have come to America. Sadly, all three are RPGs as well, so that may have something to do with it. Anyway!

When I originally saw screenshots for this title way back in the early 90s, it was being called 7th Saga 2. To this day, it's still inappropriately titled as such by some gamers. And to be fair, it both is and isn't 7th Saga 2. It's basically like stating Illusion of Gaia is Soul Blazer 2 or Terranigma is Illusion of Gaia 2. These statements are wrong, yet they aren't, because they're "spiritual sequels," which I guess means they're done in the same vein to being almost identical and dealing with the same themes, but not being connected...so it makes you wonder why they keep calling it Final Fantasy, then.

In any case, Mystic Ark is a very strange, but interesting title. I actually found it more fun to play than 7th Saga, yet I can...kind of...understand it not coming to America. In one area, you converse with people who live in giant, hollowed out fruit. In another, you deal with animal pirates. In yet another, it is entirely ruled by children. I mean, you get the idea. It's like this through the whole game.

See, in 7th Saga, it was kind of a medieval/sci-fi mashup very similar to that of certain FFs or even Phantasy Star, but with an Enix touch to it. This is more like a very confusing mashup of several different sci-fi ideas all at once. It almost feels like a predecessor to the Mother series in a way, but not quite. Actually...maybe I should've mentioned Mother 1 or 3 here, but...nah.

If you liked 7th Saga, there's no reason the strangeness should dissway you from playing this title, but yes, it's very...VERY...weird at times. 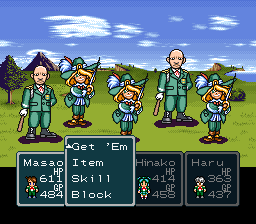 Actually, with this one it's almost more about "games that are just too awesome to come to America." And it's strange. And it's an RPG. Anyway...it's a very fun game. I mean, any game that starts with you being transported by airplane to an island that's effectively a giant high school, but missing your stop, so they chuck your ass out of the plane, then you land on the honor student of the local newspaper, then the students decide to make you the new editor to take his place...well, you're already off to a great start.

There's a penguin army, clubs you can join and learn abilities from, a traditional level up system with some interesting touches, equally interesting turn-based battle system, lots of hilarious enemies, equally hilarious dialogue and situations, and...and...well, it's just about the funniest, most engaging game I've ever played on the SNES. Yeah, Earthbound included.

I mean seriously, kudos to the translation group Aeon Genesis. Without them, not only would I not have heard of this title, but there's a good chance the rough translation wouldn't have been all that funny. These guys bust their asses to make a lot of great translations, but in my opinion, this is one of the best. Hourai High is an instant classic, but I do get that RPGs really weren't taking off that well, the developer wasn't well known in America, and there are some questionable situations. There is really only one reason I can think that this game didn't come to America and it's a really, really stupid one: the game is a little slow at times. No really, that's it. I've beaten this game frontwards to back and I can't think of any one reason it didn't come to America. It's an absolutely incredible game experience. You get to play as a fairy. Okay, then maybe two reasons.

That aside, you watch over a mechanical boy and try to teach him right from wrong, how to do stuff, inspire confidence in him, and so on. There are various stages where you have to fulfill various tasks to move on. Some are fairly simple, like learning how to do various sports, or sing, or fight, or whatever...and others require...well, a little trial and error...sometimes even forcing the kid to unlearn and relearn certain things differently.

The game has a great story, charming characters, good dialogue, excellent graphics and atmosphere, and...well, I could just go on and on and on. There's also a sequel on the N64 that I'm taking a crack at, but so far it's not quite the same. Wonder Project J was a great game that takes a very different approach to character development and is itself inspiring. I could very seriously see another sequel working as a casual title on a variety of consoles.

Weird or not, insane or logical, Japanese games truly are amazing. I won't be as pretentious to assume that ALL Japanese titles need to come to America, but at the very least, as strange as these titles are, they are among some of the best that were never released. Stay tuned!
#ShareonCommunityBlogs
Login to vote this up!