These Are A Few Of My Favorite Things - Episode 7 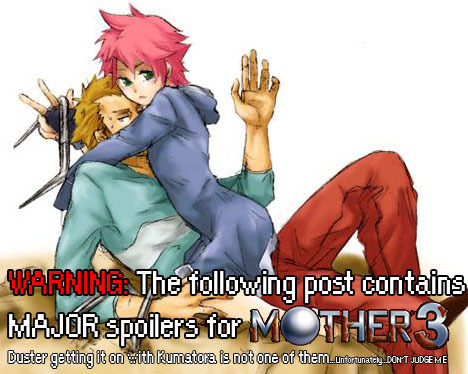 And now for something a little more lighthearted. You know when you're playing a game and it makes references to its earlier spiritual prequels? Well, with Mother 3, this happens somewhat often as it has a lot of the same characters such as Mr. Saturns, various running gags, and so on. However, one thing I certainly did not expect is one of the best. Toward the end of chapter 8 (the final chapter), you have a long hallway, then a short boatride.

Sounds fairly unimportant...unless you've played both Mother 1 and 2 (Earthbound). If you watched the video and still didn't get it, here's why it's so awesome. The hallway is the old NES title screen theme for Mother 1. The boatride theme is a revamped version of the field theme for Mother 1. Furthermore, along the ride you get to see various things from Mother 2 that were significant.

In fact, even after that you get a pencil eraser and use it to erase a pencil! Well, if you want. It has no relevance on the plot at hand, nor is it absolutely necessary...and yet, it doesn't matter. It was an immediate nostalgia trip for me. I could watch this scene over and over again. Absolutely brilliant.

So there was a lot of dark, near depressing stuff this time around, but a little light at the end of the tunnel. I hope you enjoyed this one and to be honest, I'd love to get more of these out in rapid succession, but it takes a while for me to remember the scenes I absolutely adore. Well, see you next time!
#ShareonCommunityBlogs
Login to vote this up!