Here's some epicness for you guys to spaz out on.

Also, someone please post this trailer on the main page!

I'll go through the video and categorize my analysis by video sections. Enjoy! 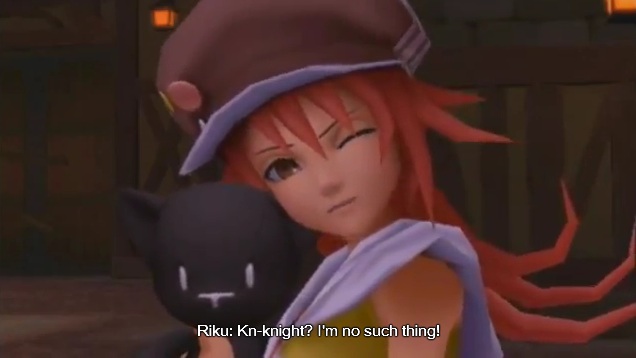 Shiki mentions "I'd be in serious trouble if I were made to return, though..."

What does this mean? Are all the TWEWY characters aware of their home world (TWEWY universe), like Joshua is, in comparing the two?

THEORIES: The TWEWY world is included in DDD, and the characters are somehow put into Traverse Town, which would explain why both Shiki and Joshua are aware of multiple worlds.

Mickey doesn't know Sora, but knows of Keyblades, and mentions that he's also infiltrated the world for a reason (for minnie, probably, but also perhaps for Donald and Goofy). Are worlds crossing time, as well as space? How can Sora visit a world from the past? Can two different Mickeys co-exist if all of the RoS worlds are restored to the RoL?

THEORIES: This also indicates that Musketeer Mickey isn't originally from this world at all, which must point toward being King Mickey in the past... 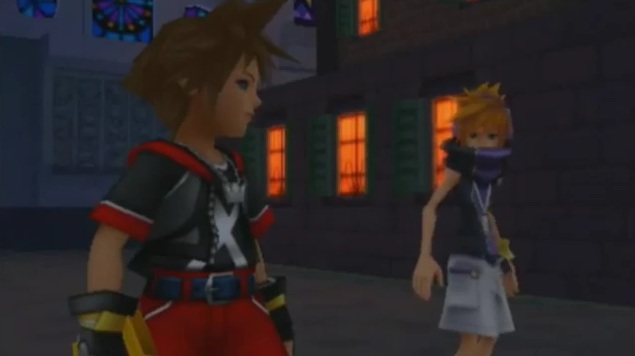 Neku yells out to the Cloaked figure "This isn't what we promised!" and then proceeds to jump up and tackle/arm-lock the hooded figure. At that time, Sora falls asleep at the sight of Neku confronting the hooded figure, apparently just standing there, not attacking Neku or Sora.

Riku goes into some sort of special mode and puts on dark claws/boots.

THEORIES: Perhaps it's connected to fusing with the Dream Eaters?

The Riku/Sora/Mickey vs MX fight at the KG looks symbolic of BBS's fight, following the same pattern of MX elevating the ground and conjuring the same orb of darkness that he later shoots into the clouds in BBS.

THEORIES: Some people say that this is foreshadowing to the future, but I rather think that it's simple symbolism: Riku representing Terra, Sora representing Ven, and Mickey representing.....Aqua?

Joshua confronts Neku, and Neku reacts in a negative way (gauging from Neku's stance, facing away from Joshua), which leads me to believe that Neku is mad at Joshua for something, or he's just trying to avoid what Joshua is saying. Joshua is accusing him of giving up on the world, or their goals/objectives revolving around the world.

THEORIES: Perhaps Neku gave up on trying to help the people in Traverse Town. Or perhaps, after the events of 2:39 in the video, during the confrontation with the hooded figure, the hooded figure tells Neku that the "promise" won't be upheld, discouraging Neku to the point of giving up.

If you notice, Lea is looking directly at, and talking to, the drawing on the wall during the entirety of his sentence (of the heart with the notations written around it).

THEORIES: Lea wasn't looking for Ienzo at all, but rather at whatever the drawing of the heart is depicting on the wall. The "icky job" Lea's referring to, therefore, must involve the depiction on the wall.

If this is in the present, then what does that mean for Ienzo? Is he revived as well? His lab coat is suspicious, because it would conflict with the theory that revived somebodies keep their clothes/memories from their nobodies (skip to 7:21 for my revival theory), which Lea is apparently demonstrating. This could possibly indicate that Ienzo in this room is an illusion, and Ienzo is actually the small child he once was before dying, with an older mind from the memories of being a nobody, similar to the events in Inception.

Riku mentions Mickey, Donald, and Goofy always being together.

THEORIES: First of all, there are LOTS of questions revolving around the "Country of the Musketeers":
1. Is this world a manifestation of the past, or is it an entirely separate world consisting of characters who could co-exist in the present?
2. Is the Musketeer Mickey an entirely different Mickey, or is he a King Mickey from the past?
3. Is this Musketeer Mickey a manifestation of some of King Mickey's memories, sent into the RoS, that King Mickey will later re-obtain after the world is liberated?
4. If this is Past King Mickey, then is this where Present King Mickey meets, and recruits, Present Donald and Goofy?
5. IF Country of the Musketeers is an illusion of the past, could any RoS world, or its contents, potentially be an illusion? Sora tells Joshua that his feelings will stay connected to his lost friend.

THEORIES: Joshua's lost friend must be Neku. BUT, this conflicts with the timeline of Sora previously being with Neku. If Sora met Neku as soon as he entered Traverse Town, then Sora either fails to mention Neku's whereabouts to Joshua, OR Sora loses Neku's tail when he finally wakes up after collapsing at 2:39 in the video. If the latter is correct, then Sora must meet up with Joshua after waking up, which explains why Neku isn't in the scenes with Joshua/Sora.

Cloaked Riku unveils his face to be Riku.

THEORIES: This image of Riku reminds me of the ending to CoM, when Riku is walking with Mickey with the Organization cloak on. If it truly is Replica Riku, wouldn't he be wearing the suit of darkness that he was wearing in CoM? Also, what was Data Riku wearing? An Organization Cloak?

If anything, I think it could be an illusion of Riku's past self (if my above theories are correct that some worlds displays illusions of the past). Although, I'm not sure what the past Riku could possibly educate the present Riku about...

Xemnas is questioning the seemingly impossible existence of hearts within people like Nobodies.

THEORIES: This could possibly be referring to Xemnas questioning the existence of Terra within himself, but I think he's more so referring to someone like Roxas.

Also, the fact that Sora tells Xemnas he thought hearts reside in the nobodies/anybody at 7:18 makes me question the order that Sora visits the different worlds. If this confrontation is indeed happening at Prankster's Paradise, I'm thinking that this world happens before Notre Dame's. Otherwise, I think Sora would be acting differently to Xemnas if he had learned the things heard from YX at Notre Dame previously. Prankster's Paradise Sora sounds more ignorant, if you ask me.

Although, it's possible that Sora's confrontation with YX at Notre Dame wasn't anymore enlightening than simply hinting towards harboring extra hearts.

Pause right at 7:21, and study the outfits. This is quite confusing to me. It appears that Mickey is wearing the KH2 outfit, but I don't recognize Goofy's outfit. This also puts the entire Disney Castle Confrontation's timeline into question: Is it in the present, post-KH2? If so, how is Lea revived, displaying Axel's clothes and weapons? 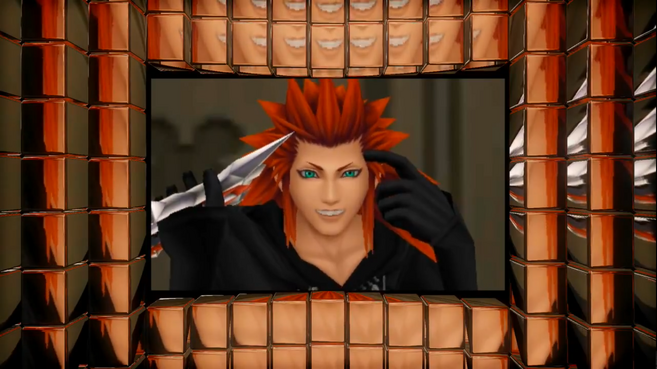 When a Sombody is revived in this way, perhaps he keeps the memories/powers of his Nobody's/Heartless'. This would have grave implications for Xehanort once he's revived, gaining all of his Heartless'/Nobody's powers on top of his own once he's revived... This would possibly triple Xehanort's powers, combining all three "final bosses" into one nearly unstoppable force by KH3.

Watch carefully how YX reveals himself in front of Riku at TRAVERSE TOWN, and then confronts Sora at NOTRE DAME, while Sora says "you're the guy from before!" at 7:44, indicating that YX has confronted Sora before, probably at Traverse Town.

THEORIES: This leads to question the timeline of world visitation. Sora's reaction to YX indicates their SECOND confrontation (Sora says "from before," meaning only one other time).

This also leads me to believe that YX is the mastermind behind most of the events in the RoS, posing as the ultimate threat in the entire game.

I'm not even gonna go there... SO confusing. Vanitas is obviously wearing the suit of darkness though. They mention hearts not your own, so they're mentioning multiple hearts, obviously. When Vanitas/YX say together "hearts not your own," are they making a point that their hearts aren't the hearts inside Sora, or is it the opposite, and they're both implying that their hearts are both the hearts Sora is harboring?

THEORIES: Vanitas doesn't appear until the camera cuts to a side view of Sora running up to YX, which before that time, YX was standing alone. Perhaps Vanitas appears as a manifestation of Ven inside Sora's heart, and perhaps something similar will happen to Riku: a conjuration of a connection to Terra will appear next to YX.
#ShareonCommunityBlogs
Login to vote this up!