1:48 PM on 12.19.2011 (server time)    0
I don�t know at exactly what point I realized that investing all my level ups on Intelligence was a bad idea in the game of Dark Souls. Maybe it was in the middle of the incredibly long animation required for using a Soul Arrow, or maybe it was the moment after I had to drill three spell casts into an armor-less grunt character to kill it, but at some point I realized how ironically un-intelligent my strategy was. However, I�m a man of steely resolve and my convictions left me unwilling to admit I am wrong, so I stuck with my plan to the end and it was glorious.

Since I recently beat Dark Souls after two months of moving at a snail�s pace through the game, I thought I might write about my play through in a blog so that nobody will read it and I can get off on all of the self-inflicted pain I�ll cause myself. Riveting, right? 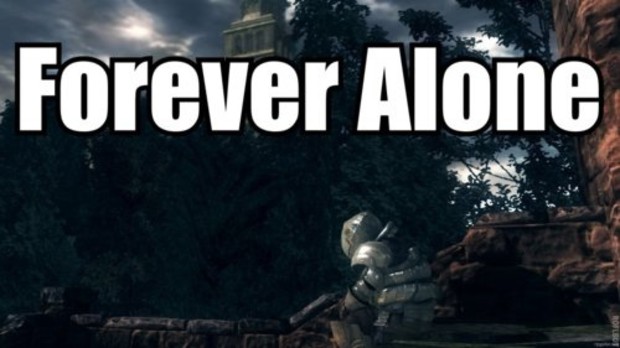 I noticed that maybe Dark Souls is actually a bit cheaper than Demon�s Souls. For one, there seems to be a lot more mobs of enemies. I just thought it was lame every time there was a group of enemies chilling together in a room, waiting to jump me. Aren�t the enemies supposed to be mindless, soul-thirsty zombies? When did they develop the ability to strategize and formulate ambushes together? I don�t remember that happening much in Demon�s Souls, but it seemed to be in every area in Dark Souls.

An even worse offender of this case was the boss battles. Remember when the bosses were tough enough to fight their battles themselves? There were more than a couple of bosses in Dark Souls that needed to bring in people to distract you while they kill in one shot. There was the Gargoyle(s), Gaping Dragon (if you don�t kill the Channeler earlier), Capra Demon, Four Kings, Pinwheel, and Nito. Two of these (Capra Demon and Pinwheel) are so weak all alone that they come back as regular enemies later on! I mean, what�s up with that? I will say that kicking the crud out of the Capra Demons in the Demon Ruins was very satisfying now that they didn�t have their dawgs backing them up.

The last two paragraphs makes it seem like I may hate the game, but I don�t. I loved it. Those are just my least favorite things about the game. My favorite boss was actually Four Kings despite the cheap ambush that you may have to suffer through. Since it was late in the game, my character was a monster with 50 Intelligence, but the fight was still incredibly exhilarating. From the fall into the abyss to the moment you kill the last �king,� the fight has the best blend of action and atmosphere of the entire game. I remember landing and thinking I needed light, so I was about to pull out my sunlight maggot when the music started blasting and I immediately freaked out. I saw the king far from me and it zoomed in on me in a matter of seconds! I remember I managed to kill one with a few seconds to spare before the next one came out, and I could hear myself breathing hard while I waited. When the match was over, I knew that it was the best part of the game up until then, and it remained the best part. It has a lot going on and I could probably write a whole blog solely about it, but I don't want to bore anybody, so this medium sized paragraphed should be enough for now.

When it comes to the overall experience, I'd say Dark Souls is the better between itself and Demon's Souls. I heard a lot of people complaining about the Metroidvania-esque open world design when the game first came out (including myself), but I believe it ended up being the best way to play in the kind of worlds that Demon's Souls and Dark Souls set up. The interconnectivity and less linear structure definitely lent a more immersive feel for the world. The subtle change to the physiology/physics also took a while to get used to as well, but it definitely made the gameplay deeper by adding something as simple as making three rolling speeds instead of just two. I think all the changes were the best directions to go instead of just making another hub world with 5 new archstones and the exact same progression, and they may actually be the way From Software always wanted things to be.

I think that about sums up everything I wanted to say about Dark Souls! I really wanted to write something while I was in the middle of playing the game, but I kept getting swamped with school work. I will say it was a blast talking about the game with knutaf on twitter, and I'd love to talk to other Dtoiders about the game right here! Thanks for reading this blog. All two of you! I'd love to hear you people's thoughts! What did you think of the mobs? What was your favorite fight? Please leave a comment and help validate my existence! D:
Login to vote this up!