8:34 PM on 12.11.2011 (server time)    0
What happens when you combine family obligations and weeks of Skyrim addiction? Broken promises and disappointment, mostly, but a lot of words also don't get written; so, to make up for it, here's a review of a game that's already been out for a month. Surely a couple of you are old enough to play it but young enough to still be holding out for Christmas presents, right?

Saints Row: The Third (I'll call it Saints Row 3 from now on for sanity's sake) is designed to make things as easy as possible. It's not that there's a lack of challenge; it's that nearly every facet of the traditional crime sandbox genre has been worked through an effort-stripping processor. Need a ride? If you don't want to instantly dive through an occupied car's window and speed off in less than two seconds, pull out your phone and get anything from a bike to a convertible to an attack helicopter delivered instantly. Cops or gangs on your tail? Duck into any building you own and your pursuers immediately break off. Sick and tired of the way you look? Stop by plastic surgeons and clothing stores to completely redesign your character (selecting from six unique voice actors) for inconsequential fees.

While the narrative concerns the Saints' fall into obscurity and slow rise back to the top, you certainly wouldn't know it considering the speed with which you obtain portable Predator drone controls, a high-rise penthouse, and more; combined with the series' trademark gonzo wackiness and the focus on ease-of-play, Saints Row 3 quickly seats itself in a perpetual all-cheats-are-on state of glorious, ludicrous excess, where dildo-bats are common weapons, all of your melee attacks aim for the groin, and boss fights can take place in Tron-like digital arenas; remarkably, the game manages to continue conjuring up new and exciting set pieces all the way through the closing credits. 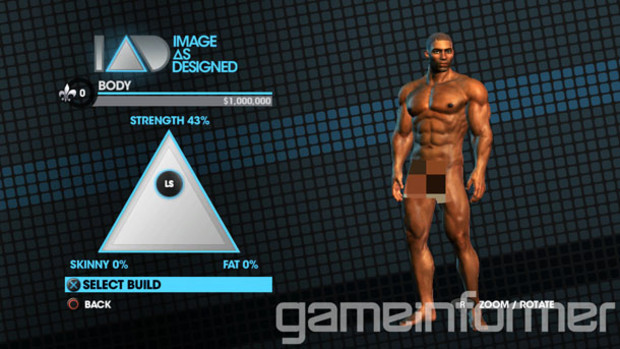 The level of customization is incredible. Also, pixelated dongs

Once you do manage to see everything there is to offer, however - it took me about 18 hours to finish the story, all the context-limited side missions, and purchase all the city's available stores and properties - there's not much left to do. While the story is surprisingly well-acted and well-written, remaining consistently entertaining throughout, the few branching options it provides hardly affect things enough to warrant a second playthrough, especially with no option to replay missions or start a New Game+ with all your upgraded weapons and stats. The city of Steelport itself lacks the painstaking detail, depth, and dynamicism of its contemporary (whose name I'm sure I don't have to mention), leaving few reasons to explore and mess around beyond baiting cops and mowing down mindless pedestrians; bringing in a friend through the drop-in drop-out co-op can help, but, with only a couple of the replayable side-missions proving to be consistently entertaining, if you want to get the most out of Saints Row 3's open world, you'll need to be pretty good at making your own fun.

Still, despite the bland world and repetitive nature of the gameplay, Saints Row 3 really is a bunch of over-the-top, walls-to-the-balls fun; it's a toybox of re-donk-ulous insanity that takes the too-far line and, instead of crossing, continually orbits it to the point where you can't help but smile and admire the puerile earnestness of it all. Only the most self-absorbed and snobbish won't find something to love in Steelport; for everyone else, you'll have to try pretty hard to not have a good time with the Saints.
#ShareonCommunityBlogs
Login to vote this up!