These Are A Few Of My Favorite Things - Episode 6

Super Metroid was a game with barely any dialogue, mostly only informational text, and yet had a great many cutscenes that spoke volumes. Spoken dialogue wasn't really necessary and the scenes were often portrayed well enough that it could shock, amaze, anger, and hype us up if it wanted to. But this scene...was one I didn't expect. So there's this big Kraid Jr. looking thing in a chamber and you have to take it out.

How do you take it out? Why quite simply by bullying it until it FALLS INTO LAVA AND DISINTEGRATES HELPLESSLY RIGHT IN FRONT OF YOUR FUCKING FACE. It also flails around frantically trying to get out. As if that wasn't enough, then you have nowhere else to go but back, so you go, THEN IT TOPPLES THE GODDAMN WALL AND SCARES YOU SHITLESS.

This gets close to Resident Evil 2 jump scares here, folks.

When I played FF13, I had many "I see what you did thar" moments. Among them was a treasured memory that was sadly deflowered, especially since it wasn't done well: the goddamn split up and reconnecting of intertwining plotlines. Alright, here's the deal. So up to this point you're attempting to evade the empire a la raft when Ultros, aka Kefka's fourth testicle, decides to be a brat and separates the party into three groups.

Now what makes this better than FF13 is that while in both they were being pursued, FF6 actually takes the time to tell a story, do it right, and let it all come together. You get more party members, there's all kinds of cool stuff that happens with the different scenarios, and it doesn't feel forced. If anything, it's exciting because it's not something a story does all that often in a videogame...at least not well, anyway. 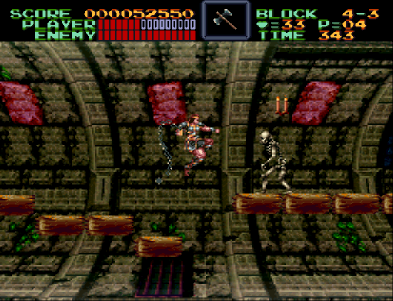 Sometimes it's not a plot twist or cutscene that gets you; sometimes it's an entire fucking stage. Take the case of stage 4 in Super Castlevania 4. Sure, it has awesome music, but the entire game does. We've got a few of the normal platforming stuffs going on with stairs, rotating platforms, whip hooks, and so on. Then you fight the mini-boss. Then it gets crazy. Crazy awesome.

First the room starts to rotate and you have to use the whip hook to hang on or fall to your doom. Then you eventually get out of that mess and get dumped into what I've come to know as "the dizzy room." It's as if you're on a static platform inside a bingo ball OF DOOM. You get through that mess and then you have constantly raising platforms attempting to smash you into the ceiling.

I mean, really, this is pretty fucking great. This is another reason I keep saying I really like the SOTN inspired Castlevanias and I still think they should attempt a 3D Castlevania every so often, but come on...I miss this.

The original Saints Row was a good game, but it was rightfully criticized for being too much like San Andreas. Of course, that's like saying your game is too much like something that makes money, was immensely successful, isn't the same exact thing, and was fun as hell, so I don't really see the problem, but maybe that's just me. Johnny Gat was easily my favorite character as he's almost like a cross between Duke Nukem and Tony Montana.

He's crazy, over the top, and so fun to watch. Sure, the main character also steals the show quite often in this one, especially with great voice acting and cutscene work, but Johnny Gat was the true showstopper for me. In the first scene, Johnny's girl gets killed (for real this time), then he almost gets killed. In the second scene, the son of the gang boss is thumped for disrupting the funeral, then dumped.

Okay, imagine this for a second. You've never heard of Katamari Damacy. Suddenly, you see it referenced in a magazine as one of the top games of the year for being unique. You like unique games. You decide to go check it out. Knowing NOTHING about the game, you pop it in, watch this intro...and think to yourself "what the fuck did I just watch."

Now flash forward to 10+ game hours easy and watch the intro again. You won't care. That...is the beauty of Katamari Damacy. It's weird, bizarre, and one of the most fun games I've ever played. To this day, both that intro and music track will be engraved in my mind as opening the door for unique, artsy gaming in my world. I can feel it. I can feel the cosmos.

In conclusion, uh...well, these games really didn't have anything at all to do with each other, did they? Sure, they're all pretty cool and interesting for one reason or anything, but I can't think of anything that links them. I suppose I could just put filler space in here and hope it makes up a paragraph. Yeah, I could probably do that, but even that could be hard to write. Oh wait, I'm done.
#ShareonCommunityBlogs
Login to vote this up!