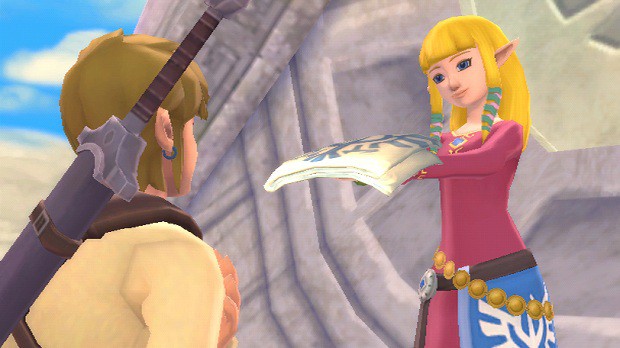 One improvement on previous entries is the relationship between Link and Zelda, which finally manages to flesh out both characters beyond the usual hollow archetypes of hero and damsel in distress. Stripping Zelda of her royal status (although she is still the daughter of the prestigious Knight Academy's headmaster), she instead becomes Link's dearest childhood friend and unspoken crush, the one who wakes him up when he sleeps in - leading to the game's most heartbreaking line - and shouts down the gang of jealous bullies who confront him. If the other characters are mostly reduced to space-fillers (exceptions being Groose's excellent comedy stylings and Lord Ghirahim's gleefully sadistic androgyny), putting Link and Zelda as the game's emotional core works to moving effect.

The central love story - because that's what it is, even if Zelda is quite the tease - is enhanced no end by Koji Kondo's versatile and playful score. While only the end credits track reaches the heights of his greatest works, notably on Ocarina and Mario Galaxy, the orchestration is an enormous step up from the MIDI-produced soundtracks from previous Zelda titles and hits all the right emotional cues - sad, funny, stirring, sedate - at all the right moments. The way the music for the Skyloft Bazaar alters slightly to suit each vendor is a particularly endearing touch.

So too does Skyward Sword change character, sometimes for better and sometimes for worse. The painterly visuals are a perfect fit for the series' unique blend of epic scope and intimate charm, but the feeling pervades that they are unlikely to survive the leap to the next generation of consoles. The streamlined design leads to some of the series' most engaging dungeons, but also makes this the first 3D Zelda to have no time for a sunset. The story of Zelda and Link finally finds a heart to match its legendary scale, but reduces the supporting cast to non-entities. For every fresh innovation to drive the series forward, there seems to be a frustration or a loss to match. Nods to the past feel perfunctory and half-hearted. A relief, then, that the moments when it all comes together are so much greater in power than those when it stumbles: Skyward Sword's greatest achievement is in getting a twenty-five year old series moving again. [ 7 ]

This review will also be published on my blog at 12pm GMT tomorrow.
#ShareonCommunityBlogs
Login to vote this up!