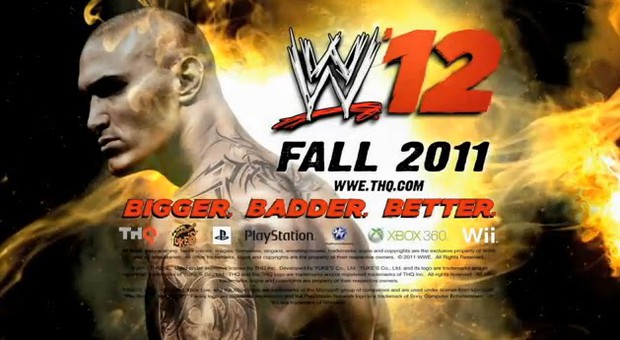 WWE '12 was revealed with a lot of fanfare. Rebranding the series away from Smackdown Vs. Raw and with a tagline of "Bigger. Badder. Better". With everything they revealed and each snippet of information that came out, it gave wrestling game aficionados such as myself a good reason to believe that a few things that were broken in the last game were fixed as well as adding a bunch of new customization options such as creating your own arena and having your own brands with exclusive wrestlers, but have they pulled off that feat?

SD V Raw 2011 was probably a bigger revolution. It changed the physics model and added a Universe mode, which forms shows and matches for you and keeps a storyline of your wrestlers progress as well as maintaining ranks for the various championships. It's a great idea in theory, but the previous game wasn't exactly coherent in what was happening, seemingly randomly throwing in cutscenes. It seems that in the race to add things to add to the box and keep the yearly schedule rolling, not much has changed.

What they have added is the idea of "Remarkable Matches" and this is a rare occurrence that actually has a storyline spanning weeks or months and they're built into happen, such as winning your first match brings out Brock Leasnar, winning the tag championship bringing out Demolition and winning your first match with Cody Rhodes brings out Goldust. These work well and actually makes it feel like you're on an ongoing wrestling show. You can also now defend a title when you like in any match, so if you prefer to play the role of the show-runner as well as playing the matches, you can now have more control over that. On top of that there is a draft after Wrestlemania which runs just like the real draft, with brand v brand matches with the winner getting a randomly assigned wrestler moving over to the next brand.

Injuries were also added, which is more of a hit and miss affair. What tends to happen is someone will get injured and be out for months, meaning you can't pick him in matches. What ends up happening though is that the logic of the game will cause the injured wrestler to still be booked into matches, even the week after. Poor old Arn Anderson in my game was still wrestling with a career ending injury and saving his friend Cody Rhodes in a match. Interference can now happen by pressing Y and having 1 minute to make whoever you want to win get the pinfall. It's a nice little mini-game, but it has happened where I've woken the referee up and the guy who was being pinned gets the win. Since the first 3 times I've done it though, trying this from then has locked up the entire XBox and required a re-start.

Unfortunately, outside of that, little has changed. Random cut-scenes happen with little or no purpose and it starts to grate you after a while. My CAW came out to the ring after Dolph Ziggler won the WCW championship to celebrate in the ring with him and the commentary saying that it was a touching moment that they're both champions, totally ignoring the fact my CAW held no titles. HHH and Cody came out to celebrate CM Punks win, despite having no connection with Punk and being on a completely different brand.

The biggest offender though was when my CAW cashed in the Money in the Bank contract. This is where a wrestler has won a ladder match to have a title match at any time. In the real world, this usually occurs after the champion has taken a huge beating and he comes out to make an easy pin. In the game, the original match never takes place and the MITB winner walks out with the briefcase and cashes in. It works a little better as the champion is already hurt and they guy cashing in gets a signature, but what happened in my game is that instead of winning the active WCW title, I won the inactive World Heavyweight Championship, making cashing in pointless.

it's a real shame that in the second year of this feature, it still feels fundamentally broken. I'm not sure if the yearly schedule for churning these games out has given them a rush to get new bullet-points on the back of the box and not fix the original features, but if Universe worked like it should, it would be the best mode in any wrestling game bar none.

Other things are broken too. The physics model still isn't right as demonstrated above with people landing in mid-air when a weapon is nearby, the ring occasionally glitches to a black mess which makes the match unplayable, I've had a guy be whipped into the corner, then magically float to the other side of the ring forcing a match re-start as he couldn't be taken out of it and Create-a-Story feels broken as well. CAS keeps bringing up the wrong name of the person that's speaking (although their image is correct) and when you put a match segment in, the camera is zoomed out way too much and any pre-match damage modifiers you gave to a wrestler have no effect. The servers are also unstable right now, but THQ have promised that fixes are coming very soon for that area, so I'll give them the benefit of the doubt and gloss past that for now.

I've been negative, but the new RTWM is a great little story even if the Outsider story is a lull in the proceedings and the new AI is working very well, actually providing a challenge this year. It's incredibly addictive even with the issues and it's slightly frustrating that a few errors can really hamper a decent effort as it would put me off pre-ordering next year. THQ have been stingy with patches to fix things in years gone by, but I really hope they can fix a lot of this with a couple of them. Maybe take a year off and really hone WWE '14 with a steady stream of DLC to keep the roster fresh.

They've been moving in the right direction with the last couple of games, I really hope they can just nail it all one year.
#ShareonCommunityBlogs
Login to vote this up!