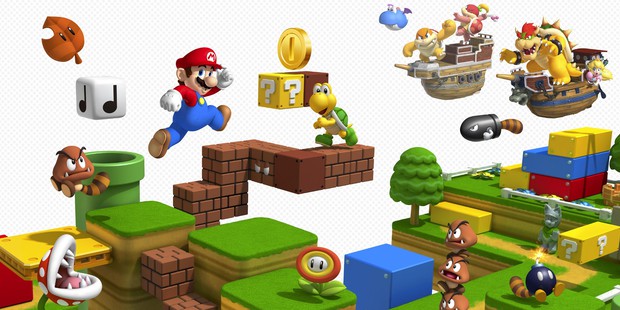 >> In my 30 years on this earth, I have played a ton of games. More specifically, I have played a ton of Mario games. Running around, collecting coins, obtaining power-ups, stomping on goombas, breaking blocks -- these actions are as natural to me as breathing. They are soul food for my game-obsessed heart. I�d even go as far to say that the Mario series of games (omitting spin-offs like Mario Party, sports, etc.) are the most consistent video games in terms of quality, and have been since the original in 1985. Back when Mario first entered the third dimension on the Nintendo 64, a lot of the classic NES/SNES sensibilities had to be left behind which created a rift in the Super Mario franchise. From that point on, you have your 2D sidescrollers (New Super Mario Bros. on DS) and your 3D adventure games (Super Mario Galaxy on Wii) each carving their own path. What we haven�t seen yet is a flawless melding of the two....until now.

Super Mario 3D Land, I�m happy to say, is the first great game built for 3DS. Up until this point, no game in the 3DS library has taken the concept of the glasses-free 3D beyond the �Ooooooh looky� phase. For this reason, the slider which controls the intensity of the 3D has stayed primarily in the �off� position since I acquired the system back in March. With 3D Land though, the stages are built in such a clever way, they actually use the added depth as a gameplay mechanic, instead of gimmick. Refreshing! There�s also a command assigned to the d-pad that switches the 3D from outward to more inward. It�s hard to explain the effect without seeing it with your own eyes but I found it to be a thoughtful inclusion nonetheless. It doesn�t hurt that the game is downright gorgeous too, rivalling some of the best looking Wii games out there. This is due in part to the solid precision of the automatic camera which always keeps the action on-screen and never ever requires your input.

As with any Mario game, power-ups are all over the place and each one alters the plumber in uniquely helpful ways. Of course the Tanooki Suit is in full effect here. Eh, well partial effect is probably more accurate. Unfortunately, the gift of flight is no longer part of the package but tail-whacking and floating still are. Other power-ups include returning favorites like the Super Mushroom and the Fire Flower, along with new ones like the Boomerang Flower and the Propeller Box. The later is exactly what it sounds like and is used to great effect on some of the vertical stages unique to 3D Land. The Star Coins hidden in each stage are used to unlock bonus levels and boss battles down the line, so they�re definitely worth searching for. Flag poles once again serve as the ending point for each stage and the Bowser bridge fights make a triumphant return as well. All in all, Super Mario 3D Land is a perfect blend of new and old concepts and a great reason to own a 3DS.

BUY IT if you�ve got a fever and the only prescription is more Tanooki Leaf.

AVOID IT if Mario games became far less interesting once you were introduced to beer pong and UFC.

That's it for #008! As always, I appreciate your time and I cherish your comments. Thanks for reading and more importantly, for giving me a reason to write. Please don't let that stop you from throwing valid criticisms my way though. I'm a big supporter of brutal honesty and I assure you, I can take it. See you next issue!