4:56 PM on 11.16.2011 (server time)    0
Note: I have not had the pleasure of experiencing any of Zelda's handheld outings beyond Link's Awakening, and shall thus omit them from this post. I will also go ahead and mention the CD-I series in its entirety so I can place it as far from my mind as possible.

The average person could be forgiven for assuming that Nintendo, the company that recently found immense success in courting little tiny kids and frail old grandparents with bright, happy, sterile games and images, could ever be capable of conjuring up anything more unsettling than the shiny and insincere smiles of nuclear families tinkering around with a Wii. The average gamer could be forgiven for making the same assumption while noting an exception for the Metroid series. Those of us who've stuck with Zelda through its many incarnations, however, know that its developers possess the kinds of warped and twisted minds you'd only see lurking in gaming's most macabre niches or plastered on the front page of a newspaper website with the caption "LUNATIC PERFOMS SELF-SURGERY, EATS OWN PANCREAS." Since it's Zelda Week, why not take a look back at all the moments in Link's adventures that left us with the lights on for a month and our young minds scarred for life?

Both Link to the Past and the original entry, groundbreaking and timeless as they may be, were a bit short on horrific monstrosities, so we'll skip right over to Zelda II. Like the moustache- and power armor-adorned franchises that complete the holy Nintendo triumvirate, the series' second outing was an unconventional one, moving most of the gameplay to a sidescrolling perspective and adding in a bunch of RPG weirdness we really haven't seen since - but those who've played it probably remember precisely one thing: 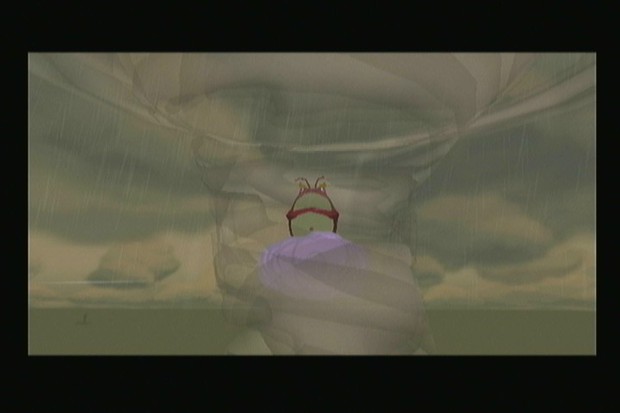 I don't know what it is. I don't know if it's the exaggerated art style accentuating the shape, the fact that it continually grows larger and larger as you draw near until it utterly dwarfs you, or the sudden storms that accompany its presence, but I do know that after my first sighting, I turned tail and sped away, working my way around the controller faster than I had previously thought possible - because I did not know where one might or might not be, every trip from then on was utterly nerve-wracking. Little did I know that one of the Plot Orbs must be placed on an island perpetually circled by one, and then after the next dungeon, I had to sail right up to one. Sure, they go away after obtaining the warp power, but I still had to direct my eyes toward the ceiling as the cutscene played out, every single time. Even today, I continue to have that same feeling of dread every time I pick Wind Waker back up and start sailing; it's no longer the cyclones themselves, as I'm always going "oh, that's it?" when I finally see one. It's that inescapable, intangible fear, which convinces me that something horrible is always right around the next square, or right behind me.

With Skyward Sword just around the corner, I have faith that Nintendo will come up with fresh new horrors to plague our minds, and look forward to discovering them as soon as I can scrounge up the cash to buy it along with the rest of the awesome that's releasing this month. Surely I haven't found everything in the series, though; what's the most terrifying thing that's happened to you guys in a Zelda game?
#OpinionEditorial
Login to vote this up!