Hand Holding Vs. Being Totally Lost

Sometimes moderation really is best, as is the case in hand holding vs. being totally lost. What the hell am I even talking about? We've all been there. "I know I move the joystick to go forward, thanks. Yes, I'm pretty sure the jump button still makes me jump. Way to go, I never would've figured out a TRIGGER BUTTON would let me fire my gun." But what about the other side?

I had an interesting experience recently. Despite being mildly annoyed by the constant kibitz I got from lame and totally unnecessary tutorials as well as insultingly simple puzzles coupled with games ACTUALLY TELLING YOU THE SOLUTION rather than letting you figure it out, I got stuck. In what game? Okami, a fan-fucking-tastic 2006 PS2 title that if you haven't played, you should totally turn in your gamer card right now.

I ran back and forth between the only 3 locations I knew about on a map trying to figure out if I'd missed anything when nearly an hour later, I happened to stumble upon the entrance for a village I totally forgot about. "Oh, come on! The game didn't even tell me it was there or that that's where I was supposed to go! ...wait a minute." And it was right then that I learned that a game that had come out only 5 years ago was silently laughing at me. 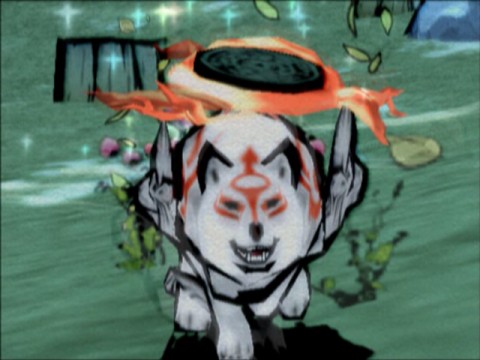 See, if this had been an open world title like Fallout 3 or Oblivion, it would never have happened. Why? Because you're expected to explore, there's much more than just the main quest, and you can have fun just in derping around. Okami can be fun when just exploring, but there are no true side quests and on top of that, it's all about the main quest. It's very much like Zelda with a wolf, but not Twilight Princess, actually.

The even bigger insult, however, was this would never have happened with a title from the 80s or 90s either. Why? Most console RPGs and action/adventures from back then didn't really hold your hand, but did give you at least some direction on where to go and what to do. Now sometimes it was just that there were very few places to go and things to do from where you were, but usually it was that you were told you needed to go there and that's that.

But even if I wasn't, what's the one golden rule of RPGs? Talk to everyone, search everything, loot. Sometimes if you're stuck, you're expected to be stuck, because you didn't talk to that one kid hidden away in a well somewhere that explained that the main quest is changing direction to an entirely different continent, but only after you talk to him. This was perfectly acceptable in older RPGs.

And sometimes nobody's even heard about the fucking game you're playing.

In other words, I should have explored more one way or the other, but didn't because up to that point, Okami pretty much explained everything for me and told me exactly where to go and what to do. Then, in that ONE moment where it didn't quite do that, I was lost. Horribly lost, in fact, to the point that I had pretty much collected everything I could collect in an area WITHOUT REALLY TRYING.

Worse still, it had happened more recently with two other titles I totally love: Dragonquest 9 and Lost Odyssey. Both of these experienced the same problem at the same time: I got a fucking boat. What's the problem with this? Well, in the original Final Fantasy, when you get a boat, you get it kinda early and you're not given much direction, but it's still fairly obvious where to go because of the golden rule (don't tell me you forgot it already).

For the most part, Final Fantasy games give you vehicles only so more locations become unlocked, not so you can explore. What's the difference? Envision two things in your mind: Castlevania - Dawn of Sorrow and an airplane with unlimited fuel. In DoS, when you get a new ability, it's not unlike Zelda in that it will allow access to a FEW more areas, but not many.

You'll still be juuuuuuust out of reach of that one treasure chest, door, or whatever, and be left wondering what crazy new ability you need for that. In a way, abilities in the newer Castlevania games serve more as glorified keys that practical abilities. An airplane with unlimited fuel, however, will let you go anywhere, anytime, anyhow.

Now imagine you get an airship within the first 10 minutes of Final Fantasy 6 with barely any direction on where you need to go next. That's pretty much what happened with DQ9 and LO. I was given no real direction on where to go, given this amazing craft for exploration, and BAM, totally abandoned by the narrative itself until I stumble upon it again like an annoying game of hide and seek with the developers.

And the worst part is I'm often too prideful to look up an FAQ because "that shit's for ignorant pussies," at least until I've put down the game for a month because I genuinely cannot figure it out. It's an interesting back and forth where I hate to have so many tutorials for obvious and stupid things that I can probably figure out myself, but a lack of tutorial or direction can wreck a game just as easily.

Too much stupid back and forth.

Then again, it could just be me. Does anyone else seem to experience the same thing or am I just crazy?
#ShareonCommunityBlogs
Login to vote this up!