Aquisition: The dragonborn do it better

10:33 PM on 11.13.2011 (server time)    0
Often when I turn up for a midnight sale its seldom for the intended game. The games I really want tend to clash with what the mainstream gamer wants so something like Catherine or Shadows of the Damned never gets that midnight sale. Well, that and Nintendo games come out on Sundays

I guess this makes me a bit of a combobreaker. Last year for at the Assassin's Creed: Brotherhood launch, I just showed up to grab a copy of Tatsunoko Vs. Capcom. Several weeks ago, I wasn't there for Gears of War 3, it was all about getting Kirby Mass Attack (since it oddly didn't come out on a Sunday). 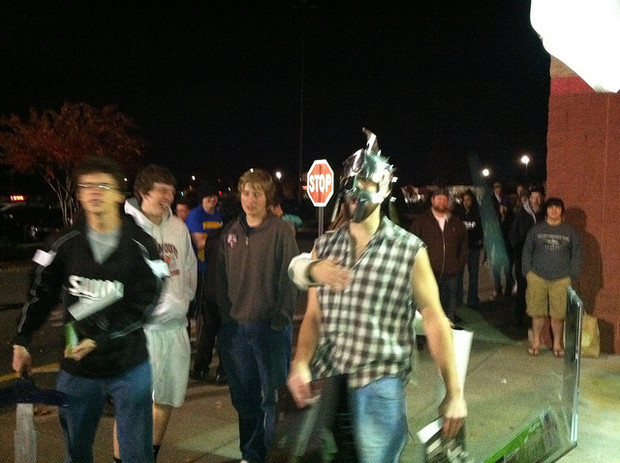 This is what I come out for. That and I wanted to get to building a character right away, so after my friend got his collectors edition we got in the car, made a quick stop at a drive thru for cheese fries to satisfy our inner Sheagoraths and I rushed him home.

On the way he frantically looked through my guide looking for info on companions. He really wanted a dog for some reason. I just wanted to get home to make my sneaky, lockpicking Archer-Mage - a Breton now known as Irene Grogdrowner AKA "Dovakin." She has a mind for mead, murder and arson. After some time with the mage's college, she'll be persuing life as a member of the Dark Brotherhood and Thieves guild. All hail our Dread Mother!

Its just nice to have a nice, big nerdy game come out and see everyone so excited for it. It was a big contrast to MW3 and much more something I wanted to play right away, even if I had to wait out in to cold to do so.

Monday night its Ultimate Marvel Vs. Capcom 3 and Shinobi for me at the Assassin's Creed: Revelations launch. Not really a combobreaker this time as there are plenty there for MAHVEL, BABY. I just hope my thumbs don't go numb for Super Mario 3D Land like they did for Cave Story as I waited in line. Its a bit cold for midnight sales this year and I do hope its the last one with games I want at it.
#OpinionEditorial
Login to vote this up!