Limbo is no fun and that is why I love it

4:55 PM on 11.10.2011 (server time)    0
Warning: this blog entry contains not only spoilers on the game in question, but also potentially hazardous levels of pretentiousness and haughtiness. It assumes that you're on (or at least near to) the "of course" side of the seemingly-eternal games-as-art debate, and will make its own assumptions accordingly. Tread lightly, non-believers, lest ye be smothered under the crushing enormity of my metaphorical moustache and teacup.

Today, developer Playdead announced that Limbo, their short, artsy-fartsy puzzle platformer, has sold over one million copies worldwide. As someone who thoroughly enjoyed the game, this came as encouraging news, and I wish those guys the best of luck in whatever different and strange project they're toiling away over. However, the milestone in Limbo's success prompts me to look back on it and go over exactly what it was that made the moody, menacing, monochromatic mindscrew so memorable to me - and that is, I think, the fact that it manages captivate and engross me without quite qualifying as "fun."

It seems to be an unwritten but self-evident truth that a game must be fun to play, based on the simple and straightfoward reasoning that something that is not fun is boring and tedious and will consequently be tossed over one's shoulder (into the trashcan if you've got a basketball history) in favor of a more entertaining diversion. For the vast, vast majority of games, this is sound logic, and I encourage developers to adhere to it - video games, like film and (arguably) literature, primarily serve to entertain, and should not be knocked for doing so successfully. 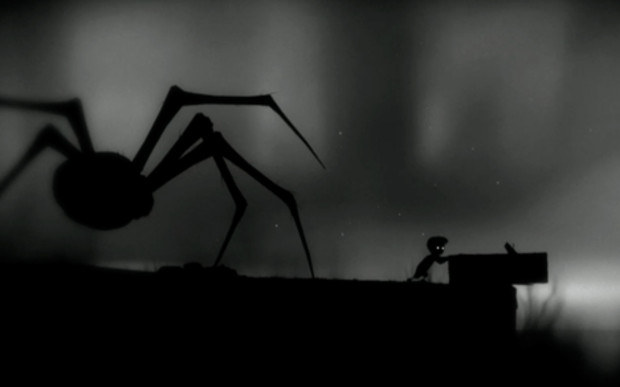 I don't know. The optimistic part of me says it's an appreciation and fascination with how well all of Limbo's components serve to make that singularly bleak and depressing atmosphere, with both the certainty of its design and the unique and cohesive end result, but I honestly couldn't say for sure. Perhaps that is a bad thing, but what I can definitively state is that Limbo masterfully triggers the kinds of switches and neurons and little emotional imps scattered throughout my mind that no other game ever really has.

It makes me wonder if this kind of thing can be succesfully replicated in a different setting and context, and whether or not there's more room for games that give a less pleasant emotional objective preference over "fun" beyond the usual gamut of free browser games. It's a difficult line to tread - and, honestly, Limbo's notoriously short length probably contributes to the fact that I didn't have the compulsion to walk away - but I can't help but feel that the range of emotions and reactions that games currently tap into is incredibly narrow, and that further exploration, while risky, could serve to bring the kind of depth and complexity to the medium that we'd only previously dreamed of.

Or maybe it's a big fuss over a little anomaly about a little game, but that kind of thinking's no fun now, is it?
#ShareonCommunityBlogs
Login to vote this up!