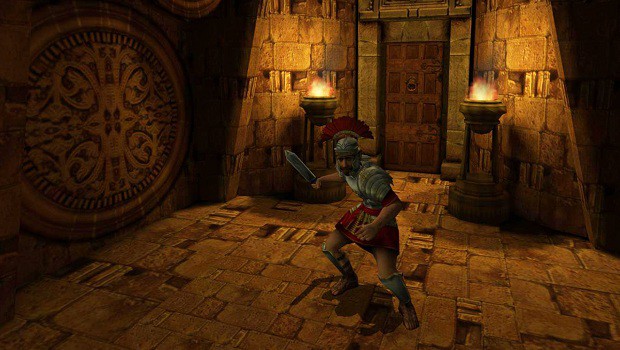 With distinctive characters anchoring the drama and its world, Silicon Knights proceed to relentlessly punish players for their sympathies. After giving you people to care about, the game starts destroying them in front of your eyes, all while you're in control of them and still powerless to change their fate no matter how many spells you cast or monsters you defeat. Since we believe in these characters and want to see them survive, this gives the world a real sense of danger and foreboding. In almost any other game, forcing the player into these cycles of predestined defeat would be blasphemous to the accepted rules of design – players get their kicks from feeling like champions, after all.

Yet by spanning the narrative across history, Silicon Knights makes every small victory along the path feel that much more important and rewarding. Discovering a new spell adds it to the Tome, which may not be enough to save the character presently in your control, but will make the journey easier for whomever is next in line to pick it up. Among a cast of vulnerable, human individuals facing a supernatural threat of divine magnitude, these tiny successes escalate until, when the time comes for Alex Roivas to make her stand, she's empowered enough to do so.

It's this sense of collaborative effort, enduring terrible suffering so that humanity will one day be able to stand its ground when the threat rises to the surface, that gives the game its emotional weight. Finding the corpse of a character who had been at your control in a past period in history becomes an unsettling reminder both of your previous failure as a player but also the reasons you choose to persist in the long struggle. This is a game with a real sense of passing time, where the consequences of tiny struggles can be felt echoing thousands of years into future where, as Alex continues to turn the pages of the Tome in her dead grandfather's office, the monsters beneath the surface are closing in on the present day.

This is a story where the efforts of the weakest person can have an impact felt far deeper and longer than any number of heavily-armed space marines. When the game talks about destiny, it's not just empty self-aggrandising. Edward Roivas is damning of humanity for choosing to remain ignorant of the consequences of its decisions. Enlightening us might well be Eternal Darkness' most terrifying trick.

PS: First off, apologies for not posting here so often these days. Believe me, I miss my dear old cblog, but between writing for my blog and Flixist, time can be tight and I don't want to disrespect this awesome community by just copy and pasting everything. I still do pop in every now and again, though, and love how you guys still do some of the most interesting and original games writing on the 'net.

PPS: Speaking of my blog, I'm currently serialising an action thriller, DEAD DROP, and it would be very cool to get some feedback from you guys. Also, I'm now on Twitter and have a Facebook page. I mostly use them for promotion, but will follow anyone who follows me and do my best to reply to any tweets, comments, or whatnot.
Login to vote this up!