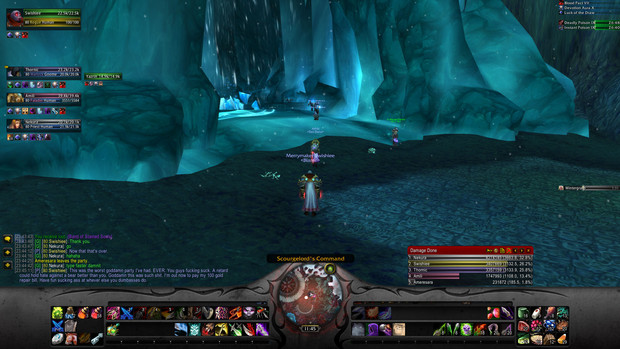 "This was the worst goddamn party I've had. EVER. You guys fucking suck. A retard could hold hate against a bear better than you. Goddamn this was such shit. I'm out now to pay my 100 gold repair bill. Have fun sucking ass at whatever else you dumbasses do."

And that was it. I had vented my rage at some people I don't know on the internet, and it was all over. Or so I thought. Little did I remember that the three of them were on the same server as Mel and I. And they let us know. Immediately after getting out of the instance the two of us were bombarded with tell messages in retaliation to my outburst. I got messages like "It was his first time tanking!" and "You're such a jerk." I just ignored them. To Mel, on the other hand, they wanted him to refer them to our guild leader to have him punish me. Little did they know that they were barking up the wrong tree.

Our guild, Blame, was a small guild that mainly consisted of four of us. But we were rude and crude. More specifically, our guild leader, Mark, let people know when they were playing even remotely bad. Our motto, Stables for Lyfe, stemmed from us giving shit to people in the Arathi Basin PvP scenario who felt that the easiest capturable base was important to guard, instead of moving us forward. So the day after my outburst, Mark tells me that the Warlock contacted him about my behavior. I don't remember the specifics of what he said back, but I know it was worse than what I had said the night before. After that, the messages stopped, and they no longer bothered me.

Looking back, I feel somewhat bad for what I said. I was in the position of being a new player at one point, and I'm sure I've made more than enough mistakes. I'm normally a laid back and respecting guy. But even guys like me have a point to where we snap. And for the unfortunate people of our group, they caused it to happen. I guess it really does happen to the best of us.
#OpinionEditorial
Login to vote this up!