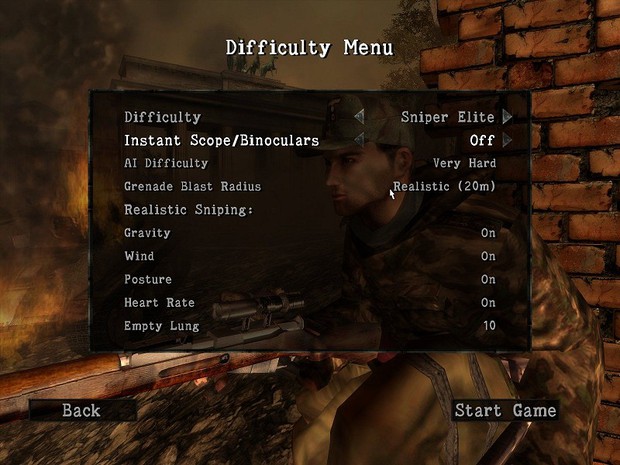 Ghost Recon: Sniper Elite had the right idea, letting the player see exactly what elements are being tuned.

Even a few sentences explicitly stating what the three main options of Easy / Normal / Hard do is a good step which many games are taking. I have been replaying Half Life 2 recently, and noticed exactly that in the menu. HL2 is also interesting in the way it handles difficulty, in that one is able to change it at any point in the game. I think this is great, but at a cost - if you are stuck, you can lower the difficulty and make a section easier to complete. Alternatively, you can increase the difficulty later as you get a better handle on the mechanics. However, with a method like this the player might forget it exists, especially if it is the case of moving up to a harder difficulty. A player might breeze through the game, having selected the easiest difficulty to begin with, and then feel less satisfied after completion having forgotten to ramp it up as they got better at the game. With all the statistics tracking in games these days, I don't think it would too hard to have the difficulty fluctuate based on performance (headshots, completion time, damage taken etc). I believe some games do this already, even. I know in the Devil May Cry series, there was a point where I died many times, and the game asked me if I wanted to switch to an easier mode having sensed my frustration.

In the end, it's up to the player to decide what they find difficult, or how they feel like tackling a game. Presenting more (customizable) options to the player is never a bad thing in my opinion, as long as there are simple defaults for those who care not for such things. More control over the game environment equals a higher maximum enjoyment a player is able to get out of the game. Everyone has slightly different opinions on what is enjoyable, and also what is challenging, and such a system could accommodate that. A criticism I can think of is the worry the player will move all the sliders to make it 'ultra easy' mode, but I feel it is already easy enough to do that. My guess is, most players don't, because the right amount of challenge is really one of the largest contributing factors to why people play games in the first place - fun.
#ShareonCommunityBlogs
Login to vote this up!

Hey. My name is Nik, and I love gaming. Been doing it since I can remember and probably even before that. I play lots of TF2, feel free (really!) to add me to Steam (the best thing since the SNES controller) and on twitter.
8Tracks profile: https://8tracks.com/niksg
Twitter: @Nik_SG https://www.twitter.com/nik_sg
You can also e-mail me at [nik.sga at gmail.com]

Now playing:
Team Fortress 2
Alan Wake
Might and Magic: Clash of Heroes
More Team Fortress 2
Marvel vs Capcom 3 (I suck, but it's my first fighting game, so yeah.)

All-time Favourites:
Super Mario World
Banjo-Kazooie
Diddy Kong Racing
Cool Spot
Taz in Escape from Mars
Super Mario RPG
Legend of Zelda: Ocarina of Time
Braid
TF2
Ico and Shadow of the Colossus
I could go on but I won't.