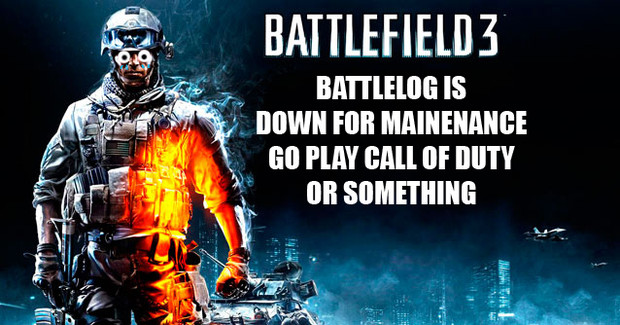 So we all know what Battlelog is, and what it's used for by now, right? Well over the past few days I've come to like the functions of Battlelog. It's nice to have a social networking site where you can chat, organize games with friends, track your stats, and more. The one drawback is that I feel Battlelog would have worked better as a separate entity from BF3, like click a button in BF3 and it'll launch the site in game. Instead the game is launched from the site. Not a huge deal. Until tonight.

Tonight is when I got livid with EA, DICE, and Battlelog. You see, I was getting ready for bed when an earthquake shook my town. It wasn't anything huge, but it was enough to get the adrenaline running and make me not be able to get to sleep. So I thought to myself "Why not play a game of Battlefield 3 to calm the nerves and then get to sleep?". So I launched BF3, and to my surprise I saw a window that stated it couldn't open the website. I thought that was weird, and maybe just some temporary bug that I could get around by launching BF3 from the main page of Battlelog. So I go to the site, and to my surprise, I have the message "Battlelog is undergoing maintenance." That's it. So, I understand online games go under maintenance during non-peak hours. That's why World of Warcraft maintenance normally started at around 5am. But at least with WoW you were notified that maintenance was coming. I had no idea that maintenance was happening to Battlelog at all.

So whatever. I can't access the online portion of the game. Maybe I can at least play single player... but wait. The single player is launched from the same website. Now the game is 100% useless. I can understand doing server maintenance for multiplayer features, especially after as big of a launch as they've had. But to not even enable me to access the portion of the game that doesn't need online access at all? That's just plain and utter bullshit.

Maintenance ended shortly after. I only knew because of Twitter. If you're going to take the site down that's needed to launch the game, at least give us a link to a blog/forum post or something that will allow us to know what's going on, and when the so called "scheduled" maintenance is going to end. And as for the single player? If you're forcing me to launch it from the main site, put a button on the maintenance notice page that will allow me to launch the damn game!

After playing a round online, I got to thinking of the other shady shit EA has been pulling lately. Most notable the free copy of Battlefield 1943 that was supposed to come with the PlayStation 3 copy of Battlefield 3. I know it was announced a while ago, and as far as I know, hasn't been mentioned at all after the initial announcement. What's EA's response to this? "Sorry. You'll get access to the DLC early though." Seriously? Bullshit EA. Bullshit. I don't even own a PS3 and this pisses me off.

Basically EA's answer to this is telling you that you get to spend your money sooner than customers of other platforms. That's like 7-11 saying "I'm sorry, but we didn't get the new corn dogs like we said we were. So instead we'll let you spend money on Slurpees a week before any of the other customers." So PS3 customers get to spend their money before other customers. How is this any sort of a compromise. And this wouldn't be such a stupid situation if they just made it right. And they could do so fairly easily.

My solution is simple. Every new copy of BF3 was supposed to come with 1943 on the disc, but it's not on there. EA is shoveling out online passes with all their new games like they're going out of style (although they were never in style to begin with). Battlefield 3 was no exception. So why not give all the PS3 customers who entered their online pass the ability to download 1943? I mean is it really that hard? It would probably take some cooperation on Sony's part, since the code is for their PSN service and only for the online functionality download. But it could be done easier and better than just telling the PS3 customers that they get to spend money on DLC sooner than everyone else.

All this being said, I'm really enjoying Battlefield 3. It's just too bad EA is heading down the path for self destruction. A year or two ago I would have said they were my favorite major third party publisher. Now I want to tell them to choke on a dick.

EA, the best way to make your customers happy, is to treat them like customers.
#ShareonCommunityBlogs
Login to vote this up!