Dark Souls: A Link to the Past 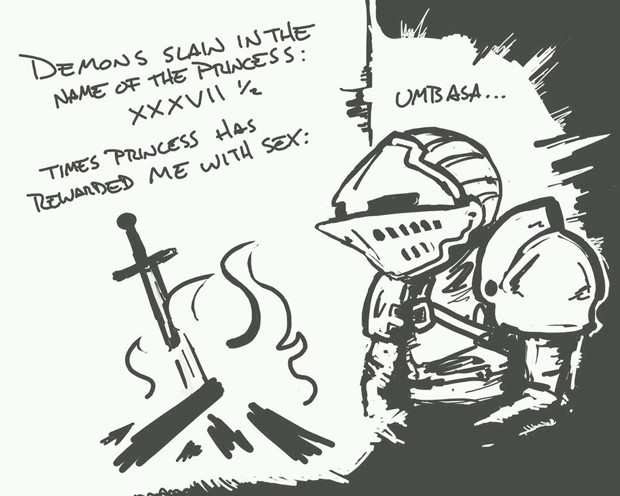 Its not exactly the most original or engrossing tale, but it didn't have to be. The story wasn't the focus, but the game and the world it took place in. The exploration, the mystery, the danger. The hidden temples and the vicious guardians therein. The secrets of war and magic Link could learn if he sought out the right mentors.

I know that it seems exceptionally odd to praise a game for what would be considered glaring flaws in other titles. Unrelenting difficulty, zero direction, inexplicable items and game mechanics, and a void where a narrative should be. Any of those things would be damming in another game, but Dark Souls manages to use them to its advantage. Its the difference between accident and design. By a very deliberate application of those old-school trappings and nuances, From Software has created a dangerous world to explore filled with mysteries to unravel through risky experimentation and hearsay word of mouth gossip -- rather than a frustrating mess like you might think it would be just by the description.

No, I don't think games in general would be better if they were all as challenging and, frankly, inaccessible as Dark Souls. I love a lot of other games. I like cinematic games like Metal Gear and Alan Wake that feature long movie-like cut-scenes and great honking slabs of dialogue that you passively sit through as the story unfolds. I like sitting down with a new game and having the basic mechanics and ideas laid out in a nice introductory level or two and a smooth difficulty curve through the experience.

But Dark Souls is like a breath of fresh air. A break from the way the industry is now and a reminder of why I fell in love with games in the first place.

I don't expect newer gamers to really get it. I'm not trying to be pretensions or cleave to some kind of old-school cred. But what I got from Dark Souls is that it is speaking to the older crowd. A love letter to gamers who cut their teeth on the NES, or maybe even earlier. It is referencing a gamer genealogy, a past that has led up to this point. To me, it brought back memories of Hyrule and guiding Link through the swamps and haunted graveyards of that land to save his princess. To Tycho it tapped into the text adventures of prehistoric gaming roots. A time when heroes nervously explored twisting underground labyrinths and around every darkened corner lurked the distinct possibility of being eaten by a Grue.
Login to vote this up!