2:23 PM on 10.24.2011 (server time)    0
So yeah , this month, and parts of last month will be sponsored by the wonderful under the counter comic books my Aunt sent me for my birthday, but remember kids, you've got to be at least 18 to read these ! Because really, what kid can say no to weed spokesmen like Spaceman Spliff and Stash Gordon? Another birthday gift I feel like mentioning is the X-men cover pillow case she also got me , isn’t she the best? 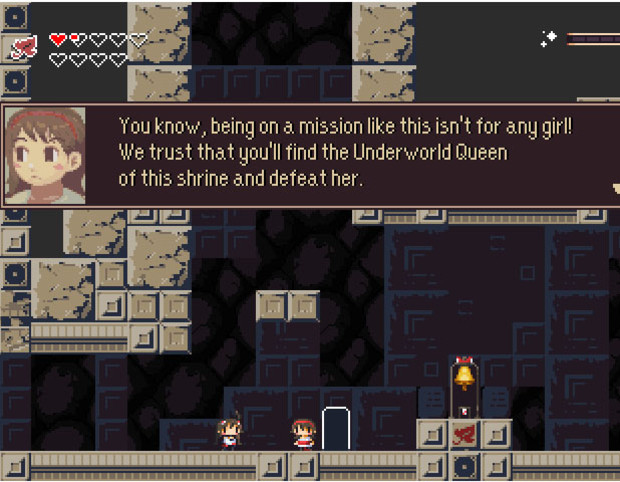 I was pretty impressed with Rdain’s Cavestory esque Momadora but it felt like it lacked some polish that in the end made it a more frustrating than satisfying experience so I never felt like finishing it even though I pretty much was on the last boss.

Momadora 2 is a whole new beast which resolves pretty much all issues I had with the first game and generally shows way more polish in all areas while adding some super cool moves, this is how sequels should be done! Take notes gaming industry.

The game takes place after the first game but this time with an all new shrine-maiden which has to protect her village from being overwhelmed buy a growing evil that has awakened in a nearby temple.This game ditches the different weapons from the first game in favor of one main weapon and a sub weapon, the main weapon is the the hard hitting melee leaf which is satisfying as hell to smack around enemies with. It was my favorite weapon in the first game, but with every other weapon being ranged and thereby superior in most cases I didn’t use it much. The sub weapon is a cool ninja like throwing card (charm) , witch you use in a Castlevania like fashion by hitting up and the attack button simultaneously which makes you feel like an bad-ass ninja!

Another new thing is the dash move that you acquire later in the game, it allows you to do a super fast dash in order to dodge attacks efficiently while making you feel like the coolest kid on the block. My only complaint with it is that it is executed by double tapping the direction you want to dash, which is rather annoying, that’s like mapping a doge move in a stylish action game which probably is the most important move in the game to something as cumbersome as double-tapping. Not only does it cause strain but is hard to execute with the split time accuracy that it requires. Luckily it doesn’t break the game in this case since it really isn’t required that much but it still feels like a very stupid decision, and a missed opportunity. Hopefully we will see improvements like a dedicated button for dashing in the next game.

The game is pretty short and can be finished in a hour or so but it still packs quite the punch with it’s relatively hard difficulty level, pattern memorization is key here. Another thing worth to mentioning is the distinctly Cave story'ish sprites the game uses. All carrying their own at times overwhelming charm , they are glorious to behold for anyone who are craving something in the Cave story style, while still keeping a own unique identity. Also notable is the sound design which is top notch, and really helps to immerse you in this charming and atmospheric world!

Download it for FREE if you’re a Cavestory or oldschool enthusiast, or heck just like games in general. It will please almost anyone.

Don’t get it if , wait? Who am I kidding? There is no reason not to get this!

I love reading short reviews like this since most of the time I already know pretty much what the game is about, so in order to create something I would enjoy reading I'm writing this. I would love your input on the format. Thanks to the other Dtoider who makes mini reviews like this, write your name in the comments and I’ll credit you for the idea. Hopefully I'll write more posts like these so look forward for more batches of small reviews , thanks for reading!
#ShareonCommunityBlogs
Login to vote this up!