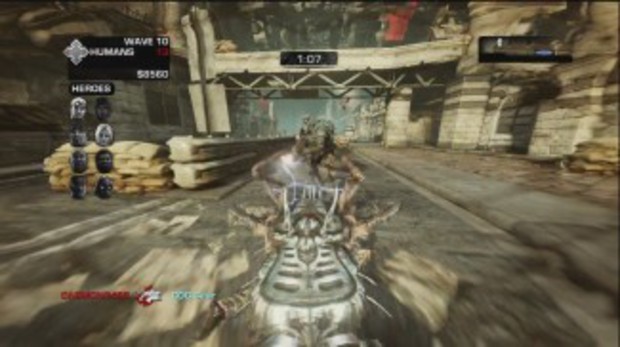 Most of the time Gears of War 3 looks like a piece of art. Environments and explosions look top notch, and enemy designs will leave you in horror. However, during a few of the cut-scenes as the camera zoomed in on a character and it would take a few moments for their entire body to texturize which is nothing new. Watching Cole talk while his body had no definition was a bit funny. However, this minor gripe is soon forgotten as you see a Lambent explode leaving his body parts and fluids across the battlefield.

Hands down Gears of War 3 is a ton of fun. With the addition of playing the campaign with 3 of your friends online, tearing through wave after wave in horde mode, or senselessly murdering humans in beast mode, Gears 3 has something for everybody. Though be sure to play the game when you can mute your mic from your friends, parts of the campaign are strong enough to make any broseph choke up just a little bit.

For its amazing gameplay, fantastic story, and the ability to spend countless hours online we give Gears of War 3 5/5 stars.

Gears of War 3 is developed by Epic Games, published by Microsoft Studios, and retails for $59.99 for the XBox 360.
Login to vote this up!

I am the Community Manager for Reload Studios, creators of the upcoming VR FPS title World War Toons.