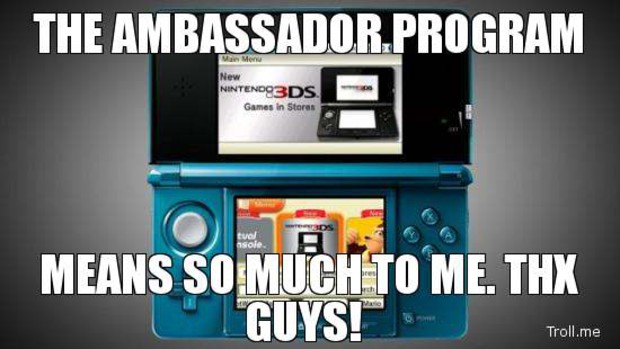 When was the last time I played a game on either of those bad boys? Oh yeah, Super Mario RPG! I also just downloaded Mario Party 2 because hootenannies on the Western board are the greatest thing since sliced bread. I haven�t played it yet because I have yet to find where to plug a Gamecube controller in the system. But who needs games? Films, photos, weather, and global polls are a much better focus for a games console. And no, I do not wear cologne or perfume, but thanks for asking Nintendo. Are you looking for gift ideas? My birthday is just around the corner (January 24th). You don�t have to get me anything, but if you really want to, I heard about this game that sounds really cool called The Last Story. But that�s just a game, and I want you guys to focus on the important stuff, like what I�m going to have to plug into my system next to maybe think about playing a game. (Will the frakennub have Pokedex support?)

*yeah, I use my Wii for Netflix, but thats only because I don�t have a PS3 or Xbox 360 or a HD tv.
#OpinionEditorial
Login to vote this up!