Can't We All Just Get Along? We're ALL Gamers!

3:11 PM on 09.24.2011 (server time)    0
As gaming has evolved since the days of the NES, the face of gamers have as well. We now have people gaming on everything from a console to a cell phone, and playing everything from realistic war shooters to the most nonsensical bird-flinging simulators. But what has also arisen is a lot of hate...

Anyone who's part of the gaming community has probably run across something like this at one point in their time on this earth: There is a story about casual gaming in the news, something along the lines of people pre-ordering the next iPhone or something. Things are okay for a while, nobody gives much of a flip...And then this guy comes along... 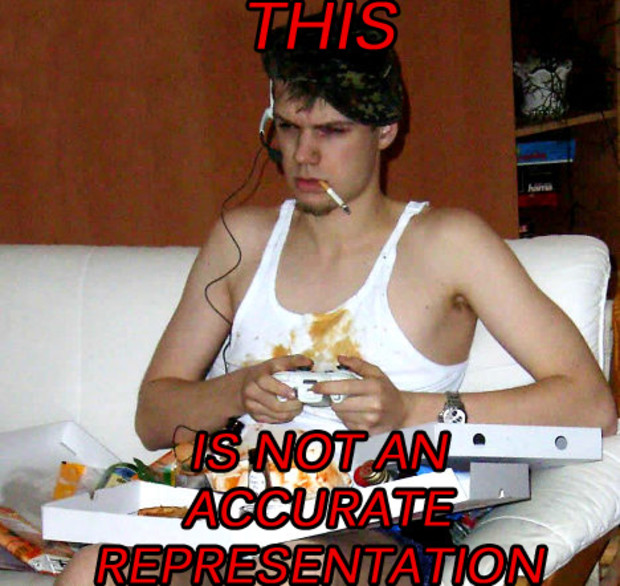 The misconception that every gamer is some kind of basement-dweller shut-in that can't get a job and has no friends is the common argument as to why "I'm not a gamer!". While those sorts of gamers do exist, there are far more of us who are well-adjusted human beings that happen to enjoy playing more "hardcore" games. Rather than sit down in front of our TVs to spend 2 hours watching a sports game, we prefer to spend those 2 hours adventuring in a fantasy RPG, or happily jumping on the heads of mushrooms and turtles, or even kicking back in a party with your buds and busting some heads online.

Just because we like to spend our free time differently than you do does not mean that we're some kind of socially maladjusted introvert. It just means we're different. Get to know one of us, and you might be surprised at just how "normal" we are.

The face of the gamer has changed over the years, and changed dramatically. That business man with a blackberry and briefcase could be a gamer. Your grandma who got an iPad could be a gamer. Yes...Even that high school cheerleader who texts all day in class could potentially be a gamer (But don't say it to her face!). All of these people have something in common...We all play video games! Yes! We all do! Both sides will try to harshly defend themselves, deny the facts, and put giant walls up in between themselves and the other side of the fence. But reality is a mean mistress, and at the end of the day, both sides are sitting down in front of a screen and enjoying a video game.

P.S. One person I'd like to openly thank for my aforementioned epiphany is our very own Jonathan Holmes. As you all probably know, he's is one of the more odd gamers out there, but through his writing and listening to him on Podtoid, I've gained a new respect for gamers who walk a different path than I. Max Scoville mentioned in the most recent Podtoid that simply knowing him has made him want to be a kinder person. I'd like to say that while I don't know Mr. Holmes in person, he has also inspired me to be better to my fellow gamer, and fellow man.

Thanks for reading, everyone!
#ShareonCommunityBlogs
Login to vote this up!