TGS: In Defense of Nintendo

5:20 PM on 09.22.2011 (server time)    0
The annual Tokyo Game Show has came and gone. Many things were announced and even more things weren't announced. It seems an awful lot of people ended up being kind of pissed off at Nintendo though. Everyone appeared to be saying that Nintendo wasn't announcing anything interesting. Then there was the accusation that they were forgetting the hardcore gamer, this wasn't anything new though of course. Then there was nubbageddeon. That sparked a whole new level of hate from gamers. 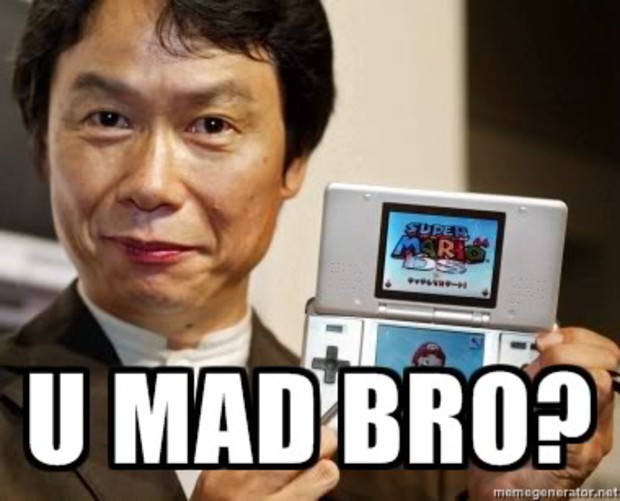 The biggest problem in all of this I think is that people forget this isn't E3. In case you all forgot the show is called TOKYO Game Show. See how all the presentations were done in Japanese and not English? Thats because TGS is mainly for Japanese gamers, most of the games you were not interested in will never see the shelves in the US. They're presenting Japanese games for Japanese gamers, some of which may come to America. I just find it so odd that so many gamers were getting upset at Nintendo for not announcing things for the US, seems a little selfish guys.

I honestly didn't think the presentation was bad at all. I will say I do have a little bias seeing as I've been a Nintendo fan all my life, but even if I wasn't I think I'd still say it didn't go as bad as some seem to think it did. While the presentation wasn't anything mind blowing, it had it's moments. We saw a lot on the new Mario Kart, loads of new information and screens/videos for Skyward Sword, we had a new Fire Emblem game announced, Mario Tennis 3DS, Monster Hunter Tri G, that new Square RPG with a ridiculous title, and Monster Hunter 4. Thats not even mentioning all the other games that were announced that were much more Japanese oriented.

One thing I think people need to understand is, every time Nintendo has a conference it doesn't mean were going to see a new Zelda/Metroid/Mario game. Nintendo has their fingers in a lot of pies, we shouldn't expect to see new big name games so soon. It's my personal belief that a lot of this anger and expectations come back to the idea that so many gamers have this unearned sense of entitlement. So many gamers feel like they're owed something, and when they don't get exactly what they want they throw a big online hissy fit.

I'm not here to just kiss Nintendo's ass though. When you really love something you should start finding faults with it. Nintendo has plenty of faults. While I don't find the second nub to be that big a deal, I do find it annoying. It has become perfectly clear that the 3DS was not ready for release, theres tons of things that point to it (studios saying they didn't have enough time to add features, the price drop, the lack of games, the second nub itself, launching without an eshop, ect.). The fact that Nintendo released the system when it wasn't ready yet, just so they could please their investors is kind of infuriating.

As a business move I totally can understand why they made the decision, however, think about it Nintendo, Where does your money come from? It comes from people buying your games, if you drive away your market one step at a time there won't be anyone to buy your games anymore. Another problem Nintendo obviously has is that they have two drastically different markets to play to, you have the East (Japanese gamers) and you have the West (American gamers). Both markets like different kinds of games and it can be pretty challenging for companies like Sony and Nintendo to play to that.

The last problem I think Nintendo has right now is that they're so damn Japanese and out of touch with the rest of the world. They seem genuinely surprised when gamers want to play games online, or when they really want a messaging system on something like the 3DS. I think really need to sit down and look at what they're doing in the way of researching what gamers want and what to do to make their consumers happy again.

All this being said, I do still love Nintendo, they're gonna have to do a whole lot more than all this to drive me away. Right now I think theres a lot to be mad at Nintendo for but theres also plenty of things to make you still love them. I love you Nintendo, but you are far from perfect. So do any of you feel the same as me? Any counter points? What Nintendo game can you not wait for?
#OpinionEditorial
Login to vote this up!

I co-host Pocketoid and I make word words on here. Some of my favorite games include: Pokemon, Metal Gear Solid, Resident Evil 4, Super Smash Bros., Animal Crossing, Shadows of the Colossus, and Legend of Zelda: Majoras Mask.

COME BE MY FRIEND NOW.


Me on that one dead social networking site