1:38 PM on 09.19.2011 (server time)    0
I've wanted to just write up a rambling about some of the new video games I've picked up lately because I had money, it was burning a hole in my pocket and now I have more games I can play and further avoid some of the ones I have lesser interest in playing (I'm looking at you Deadly Premonition, Bully: Scholarship Edition & BFBC2) that and some stellar titles have and are coming out so essentially playing catch up on some of these is nice. You'll notice that both Duke Nukem Forever and Kameo have longer paragraphs than the others by virtue of me beating the games. 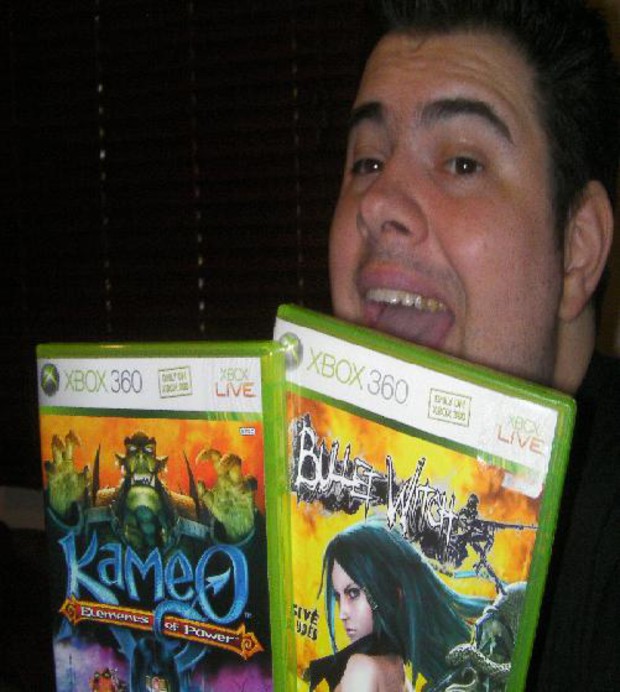 Sometimes things happen and it's just sheer timing. Unless you've been an Xbox loyalist since day one there's a chance you've missed this amazing title. A game I'll say right now SHOULD BE touted alongside the Halo's and the Gear's as one of the best Xbox 360 titles ever when we jump to the next generation. I say to you if you love adventure and love what Nintendo has been doing for years you have NO EXCUSE not to play Kameo! It honestly is such a departure from what the Xbox 360 is known for. Developed by Rare as an Xbox 360 launch title as it was previously set to be on the Gamecube then the original Xbox you play as Kameo set out on a quest to free her elven family from the Troll King Thorn. Throughout the game you collect the elemental warriors from the Shadow Trolls guarding them. You can change at any time into 3 different warriors and combine their attacks to take out enemies and solve puzzles. That's just honestly a PR way of saying it but it's a ton of fun. Nowhere else can I play as a giant Ice Chewbacca that throws Ice spears. Can grab trolls and throw them into his spiked back then grab the trolls by the head and use them as clubs while I beat down other trolls and the icing on the said Ice Cake? You then toss them across the area with sheer delight. Another warrior that's a ton of fun is Pummel Weed who is essentially a boxing...you read that right a BOXING plant. He has gloves and he jukes, jives and jabs my favourite part using the Uprooter attack to go under locked gates and at your command spring upwards with a devastating uppercut. Little Mac is that you? Honestly I wish I could go on and on about all the varied Elemental Warriors and their attacks but there are 10 of them and all 10 feel very unique and have unique moves/attacks and areas of the different worlds to interact with. I'll say this my only complaint is some of the controls, especially with Deep Blue the underwater Elemental which as far as I know has inverted controls underwater that can't be changed which makes one of the boss fights (atleast for me) excruciatingly difficult. Everything else though is fantastic. Love adventure games like Zelda but want something that feels a little easier like a Mario game? Kameo is your jam. Our jam.

This game I first saw on the mighty YouTube. Sure I'd heard of it a while back but for whatever reason I wasn't all that curious. Actually I think it was more due to the fact that I thought I'd never find the game. It's a funny game, the shooting is fine but only half the spells work and the spell wheel isn't that great. I like it for it's style and the fact that this is essentially a teenage goth girl's wet dream...of a video game. "Taste fear as your soul burns away" Alicia cries and then a lightning bolt cracks the sky. Besides Alicia's way hotter than that Bayonetta chick. Sure Bayonetta as a game actually works....but I never found librarians attractive so Bullet Witch wins just cause the main character is hotter. Logic. In seriousness though guys...you get to fight a skeletal DRAGON ontop of a plane while giant Sentinel-squiddy like things from The Matrix in the form of giant eyeballs attack a plane and these fucked up creatures that twist in weird manners and make weird sounds...they're called Caterpillar people for some reason though I can kind of see it. Then you shoot soldier guys that have faces for skin and it's about demons and you get to shoot stuff. It's really neat guys. Just incase you thought I was lyin' here's a video for your EYE SOCKETS TO BELIEVE.

Awesome Video Where The Bullet Witch Fights A Dragon Ontop Of A Plane While Giant Eyeballs Fly Around
(Edit: I had to do it this way because the video embedder isn't showing up for me. Sad fucking face)

To be Continued with my Journey To Dead Island....
Login to vote this up!