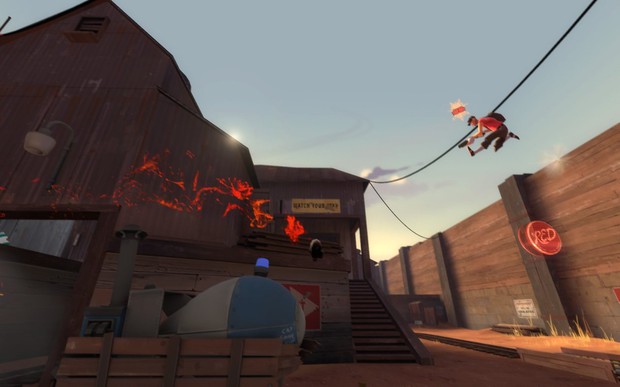 
Team Fortress 2 is another great example. At its most basic, you are choosing which weapons to go shoot others playing the game with and then doing so. Without getting into the ridiculous 'game violence is bad' thing, that alone is relaxing on one level for a lot of people (just look at how many play COD). Then, going deeper, each class has its own distinct personality and with that, a set of dialogue. Together on the extremely well designed maps, it really gives a sense of fighting on a battlefield with other unique personalities. The context sensitive nature of the lines really adds to the experience, random unique dialog lines spoken in situations I can only guess at (streaks, close calls etc). Each time that happens, it's usually right after I have pulled off some sort of nice move, and it's almost a reward that brings even more personality into the game. From the scout's patronizing laugh when you pull of a nice kill, to the giant laser guns on top of the BLU bases, everything is 'believable' in the context of its own world - a place I can go to where I can relax and build some sentry guns.

I could talk TF2 for a while, but it's not the only game or type of game I find relaxing. There have been quite a few games especially in recent years that seem to put the focus on tranquility. Games like Flotilla, a minimalist space combat simulator with a soundtrack of classical piano, the ever-popular Flower, the upcoming Journey and the simpler games such as Fl0w put an emphasis on peacefulness even if you are doing something as chaotic as blowing up space ships. Just like how people choose different genres of movies to watch based on their mood, so too do I choose between types of games (subdued, frantic) depending on how I feel like unwinding. Most days of the week last school year, I could come home after classes and find my housemates on the couches playing Halo. It was great to relax and maybe have a beer or three while blasting bad guys (there was even a daily achievement which was called "Blastin' and Relaxin' ") before getting down to some homework. Getting these quick rounds in was a great way to take my mind off things temporarily, but on busier days where I'd be in the library or a lab all day, coming home and playing some DEFCON or Braid couldn't have felt better. After all, for me relaxing isn't about not thinking, but rather thinking in different and challenging ways, which is why I am and will always be a gamer.
#OpinionEditorial
Login to vote this up!

Hey. My name is Nik, and I love gaming. Been doing it since I can remember and probably even before that. I play lots of TF2, feel free (really!) to add me to Steam (the best thing since the SNES controller) and on twitter.
8Tracks profile: https://8tracks.com/niksg
Twitter: @Nik_SG https://www.twitter.com/nik_sg
You can also e-mail me at [nik.sga at gmail.com]

Now playing:
Team Fortress 2
Alan Wake
Might and Magic: Clash of Heroes
More Team Fortress 2
Marvel vs Capcom 3 (I suck, but it's my first fighting game, so yeah.)

All-time Favourites:
Super Mario World
Banjo-Kazooie
Diddy Kong Racing
Cool Spot
Taz in Escape from Mars
Super Mario RPG
Legend of Zelda: Ocarina of Time
Braid
TF2
Ico and Shadow of the Colossus
I could go on but I won't.