10:21 PM on 09.17.2011 (server time)    0
NanDEMOnai is a semi-regular attempt to profile demos for forthcoming games as unbiasedly as possible, based on their own merits and without any consideration of hype, publisher legacy, place within a franchise, or basis on any existing property. I'm just here to discuss how the demo feels, whether it makes the upcoming release stand out as interesting, and extrapolate how the full game may end up being. Basically, a preview with as little context as possible, like a blind date.

It's been a bit since I played any sort of flight sim; I dicked around for a bit in Ace Combat 6, but never to the point that it would likely take for me to actually be any good at it. Given that I landed the plane all of one time ever in Top Gun for the NES, one could say they're not my fortť. But that's not even supposed to enter into these articles, so let's continue. 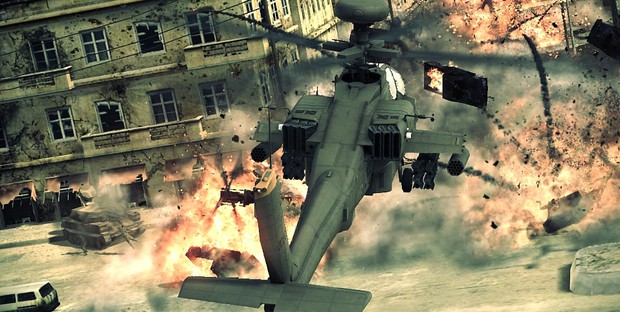 I will give the designers some credit here for making a more interesting mission for the helicopter section; while it still relies heavily on the "here are some doods, kill them doods so they don't kill your doods," formula as things progress, the doods in question are a bit more varied (individual infantry, gunners in trucks, a tank, and a couple of Hind helicopters show up, amongst other things), and there are some decisions to be made as to altitude, target prioritization, and what weaponry to use. I was particularly delighted by one point, where you have to stop a handful of enemy troops trying to abscond with your retrieval target by zooming in and precisely firing off a shot or two at each of them, as to not hit the guy you're trying to rescue.

While both mission types were fair enough, I'm kind of worried as to how responsive the game is going to be to other aircraft roles in the full version. While I try to avoid bringing outside information into these articles, I do recall checking out the confirmed Assault Horizon aircraft list, and the presence of the A-10 Thunderbolt is chief amongst my concerns. A-10s aren't exactly suited to dogfighting, as per the fighter craft level, and are more built for ground assault and support, but lack the stationary flight option of helicopters, so they're kind of stuck between both worlds. If they're going to include more mission styles in the final game to suit different craft, then fine, but the demo seemed pretty clear-cut in its differences.

That, and to be honest, it's a bit dull. Story or no story, there's only so long a wave-of-doods pattern can remain interesting, and if it's already beginning to get boring in just a demo, imagine how much worse $60 worth of that sort of thing might end up. The post-demo splash screen promises several multiplayer modes, but none of those are in the demo itself, so there's no way to judge whether they'll make up for a potentially repetitive campaign.

I dunno. I'd say grab it if flying and shooting in a vaguely realistic fashion are your thing, or you've a hard-on for airborne military hardware, and see if you'd actually be willing to pay money for it yourself. Personally, I think I'd rather try to find a friend and bum it off them for a bit once the full version is released, if I bother with it at all.
#ShareonCommunityBlogs
Login to vote this up!