5:55 PM on 09.14.2011 (server time)    0
Fusing Kinstones is a series examining both sides of divisive issues in the world of gaming, both current and recurring, in the hopes of finding some common ground both sides can agree upon. Or, failing that, I'm just going to make fun of both sides' weaker arguments, so if you must fight about things, you'll at least consider bringing better arms with you.

For the inaugural installment of Fusing Kinstones, I'd like to address the debate raging currently about whether the 3DS's floundering is sounding a death knell for Nintendo as a hardware producer. Decriers of the 3DS, typically Wii U skeptics as well, seem to widely be of the opinion that Nintendo should (or will be forced to) follow the path of Sega and become a software producer, thus opening their classic franchises up to Sony and/or Microsoft, and abandon console and handheld production altogether. On the other side, we have those claiming the 3DS is not the failure their opponents make it out to be, and that the system, and the company behind it, still need and have the time to make it something great.

Let's begin with a look at the former camp, shall we? 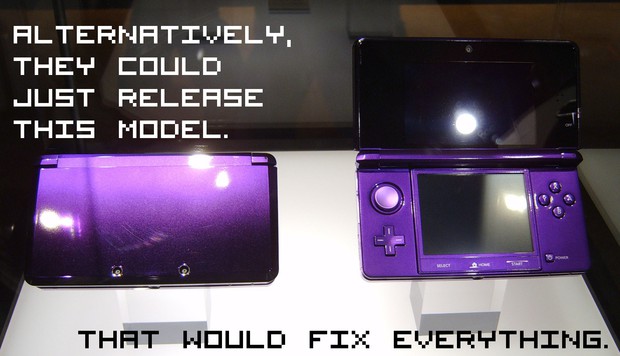 The other key factor in Nintendo's survival in the hardware jungle is the success of the Wii U. Both the N64 and Gamecube, while having some great games between the two of them, didn't do particularly well compared to their competitors, and unless Nintendo is able to convince Wii adopters to step up to playing their games in HD, and/or make the tablet controller the next big thing (rather than round two of the short-lived, underutilized Game Boy Advance/GameCube connectivity experiment), they may indeed be toast.

The earliest anyone's going to be know anything for sure is somewhere between December 26th and 31st, most likely, so it'd be nice if most of you doomsayers and you evangelists could shut the hell up until then.

Or, at the very least, stop crying about the nub. It's not like you all went apeshit over WiiMotion Plus, or the GameCube microphone, or the Game Boy transfer pack for the N64.
#ShareonCommunityBlogs
Login to vote this up!