2:03 PM on 09.14.2011 (server time)    0
I've been planning a "real" blog post for a while now but seeing as moving, vacationing, job change, moving again, and vacationing again has gotten in the way…I figured I'd just make a regular update since I haven't really posted anything in a while.

I've felt more out of touch these past couple of months than any other time in my life - and not just with the community, but with gaming in general. Right now I'm stuck in a time when LA Noire is waiting to launch, the Dead Island box art is all censored and effed up, and I'm striving to get through Deus Ex not only because of Nostalcast but also for my own personal glory before Human Revolution arrives. All of that has come and gone, and I'm still stuck here trying to sort everything out. I feel slightly ashamed as a gamer that LA Noire is still in its wrapper, I'm struggling to hold onto my Assassin skills in MNC, and I've only played about an hour and a half of Trenched (and most of that has been in my sleep - ask Trev). 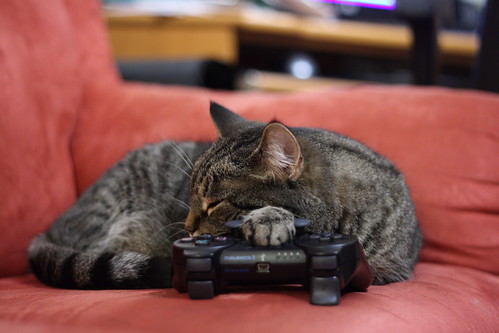 Unfortunately, I'm not this adorable when I sleep

I had hoped that moving to Boston would grant me more time to spend writing, gaming, and overall participating in online shenanigans. I figured without friends around me it'd be like high school again - going home, spending hours on end gaming and chatting online, small doses of occasional necessities. Boy was I wrong. Not only do I have an insane commute (I take three modes of transportation to get to work, four if you count walking to the train station), but the hours at my new job are a bit crazy at the moment, and I find that by the time I get home I have just enough time to make dinner and then get enough sleep to wake up in time for my train in the morning.

So needless to say, I've been completely out of the loop. So far out of the loop that even the recap team can't save me. I need a recap of the caps that were capped in a fappity fashion, to say the least. Apparently I missed approximately 50 million shitstorms, some of them revolving around female topics that I would have loved to debate, but by this point it's that whole dead horse thing. I've also missed my beloved FNF - something that's apparently dying lately. Imma try to put some CPR in that biatch when I get the chance, because I couldn't stand to lose one of the best parts of my week.

I'd also hate to lose AlphaDeus. I wasn't here last week, but I'm going back in time and giving you a big hug. We love you!

Anyway, that's where I've been and I hope to be around a lot more now that I'm (kind of) settled into my new life. Now that I'm in Boston, my goal is to attend a PAX for the first time and actually meet some of you in person. So make sure you poke and prod me when the time comes to buy tickets! :]
Login to vote this up!