5:20 PM on 09.12.2011 (server time)    0
NanDEMOnai is a semi-regular attempt to profile demos for forthcoming games as unbiasedly as possible, based on their own merits and without any consideration of hype, publisher legacy, place within a franchise, or basis on any existing property. I'm just here to discuss how the demo feels, whether it makes the upcoming release stand out as interesting, and extrapolate how the full game may end up being. Basically, a preview with as little context as possible, like a blind date.

Additionally, I can't say I intended to post this the same day as Jim's review, but I'm not reading it until after I finish this, as to not allow any potential opinion taint. 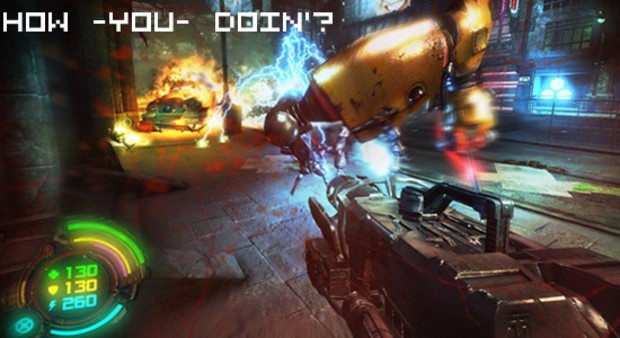 Enemies seem to subscribe to the wave/horde philosophy, for the most part, with smaller enemies trying to swarm you from time to time like so many saw-faced rats, and larger, bipedal opponents rushing you bullishly as soon as they spot you. While I hope the full game features a wider variety of more intelligent robots to combat, requiring a bit more strategy, I would honestly be just as happy if they merely ramped up the quantity of simpler enemies for the entire course of the game. At one point, you find yourself in an open area where explosives and electrical items abound, and after just a few seconds of looking around, you're presented with a mob of little bastards out for your blood. There's a certain joy in luring them through webs of spraying electricity, saving your ammo for their bigger brothers that begin filing in after you've taken out enough of them.

I can't recommend enough that any self-respecting FPSer with a decent PC grabs this demo off of Steam, or any other outlets that may be carrying it. For you achievement whores out there, there are Steam chievos to be had, and from what I can tell, achievements you unlock in the demo will carry over to your full game save. Even if I'm wrong, the ones I got seem easy enough to come by in the first level, so losing them upon starting the real deal wouldn't be particularly tragic.

It goes without saying I'm probably picking up the full version of this, especially given it's only $30, even less if you pre-order in the next... nine hours as of this posting. Those of you accustomed to more recent shooters, with your wide spreads of weapons and more linear gameplay (insert video of CoDBlOps no-fire Cuba run here) may be a bit more trepidatious, but trust me. At least give this demo a spin. If this is just the first level of the game, the full monty is guaranteed to be amazing.
#ShareonCommunityBlogs
Login to vote this up!