Apathy Cares: Cleaning Up The Backlog, Round One.

2:06 PM on 09.12.2011 (server time)    0
So, much like Gareth, I too have a bit of a game collection issue going on here. Thanks to financial stability, I've been slowly building myself up to the point where I can actually say I have a game collection...of course, the big problem with that is I probably haven't beaten many of them. Luckily, I have the internet for that, because I sure as hell don't know how to decide things for myself. Therefore, in a move that is TOTALLY NOT A RIPOFF OF GARETH IN ANY WAY, SHAPE OR FORM, I ask ye, oh Destructoid community: What should I play next? 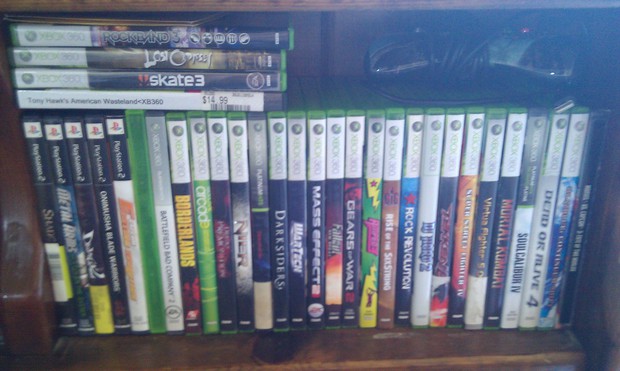 Of course, I should probably mention what games in my collection I haven't played/beaten, so here goes.

Shadow of the Colossus: Before you say it, I know. I'm a terrible person for owning this game and never playing it. I blame the fact that my brain sucks at wanting to play a PS2 game. And since the Shadow of the Colossus/Ico collection is coming soon, as well as me intending to purchase a PS3 this holiday, should I really go ahead and play it now or should I wait for the 'superior' version to arrive?

Darksiders: I bought this game almost entirely because Occams has been making amazing Darksiders 2 jokes on Twitter ever since the game was announced. I've yet to even pop it into my system though, despite all the praise I hear about it. Is it worth it, or should I skip over Zelda of War for now in favor of something else?

Nier: I have played a decent chunk of this game, probably at least a third of it. I'm in love with the story, the voice acting's nice, the music is wonderful...but the gameplay itself is SO DULL. I'd love to try to get over that glaring fault in order to finish the story, but it's a tough pill to swallow.

Deadly Premonition: I haven't even opened the game up yet. It's still sitting there, sealed, begging me to discover the FK in the coffee. Is it really as good as everyone says it is?

Fallout New Vegas: I've played a decent amount of this as well, and was really really into it at one point to the point where I was writing "Wasteland Journals" of my daily experience for no reason other than fun. And then I just fell out of it and stopped playing. No idea why. Should I boot it back up and finish the game?

Metal Arms: I saw this game being sold for three bucks used at work. After remembering a fascinating article Jim Sterling wrote about the game, I decided to pick it up only to...yup, you guessed it! Never touch it. I'm sure I should change that eventually.

Samurai Legend Musashi: Now I HAVE played this game, about five years ago or so. I remember it being AWESOME, with the ability to steal enemy's abilities and the general style of the game being so fun. I don't have the memory card I had back then though, which would mean I'd have to restart the game...which tends to always make me hesitant to pop in a game.

Skate 3: I don't even care if it's a sports game, it's damn fun and I was loving the game when I checked it out from work...but then I actually bought the game and I haven't touched it since. I should pick it up and finish it some day I suppose.


And that's about it for now. I'm sure that in about two months or so I'll have even more games to worry about (Thanks holidays!), but for now I get to keep it relatively simple. So try to help me out guys! Leave me a comment, suggest which game I should tackle and try to give me some nice reasons so I know where you're coming from. I await the Dtoid community's responses, and remember: