Decide What VIDJA GAEM I Play Next: Round 2!

10:55 AM on 09.12.2011 (server time)    0
Hey guys! How you been? Grrrrrreat? I thought so. So I did what you said. I played the game you guys suggested and boy...what a game Enslaved was. I'll type out some thoughts at the bottom of this about the game but since I had fun creating the blogs and hearing about what you guys wanted me to play I figured why not...let's do it again! You decided what VIDJA GAEM I play Next! 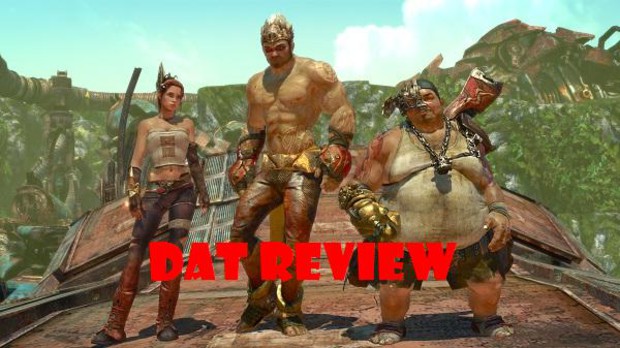 Enslaved is pretty average. There I said it. Average. I'll come out and say it right now, part of the reason I didn't enjoy it as much as I could have is absolutely mine and my brother's fault. He suggested to me Enslaved was "easy" on the Hardest difficulty. So for the first half of the game I was fighting tough battles with shitty hit detection with little health to show for it. Around halfway through the game I was so frustrated with how the game played I had to be fair to Enslaved and allow myself to enjoy it so I turned the difficulty down to Normal and went back at it...and yet still alot of the same problems persisted though thankfully the game became alot more manageable.

Still thought frequently I would hit bosses that I knew was supposed to deal damage yet got nothing and Monkey's controls were so unwieldy at times. I would play a little game called "Find The Pin Prick" in which to activate a certain thing I'd have to zero in on the exact spot I needed to be to activate it. By all means from a gameplay standpoint Enslaved is a really flawed game, it's only saving grace in that department is the platforming which at times was pretty inventive and pretty fluid provided you weren't going up or down.

Then that brings us to the "story". I have no real knowledge of the OTTW other than Dragon Ball so it was neat to see the parallels to that show versus this game. Monkey with a strip of material down his back like Goku's tail or even just a monkey tail in general. His cloud which was essentially the flying Nimbus (sorry only one person can ride this thing) and of course Pigsy (essentially Oolong). Let's just say though when it came down to it I really enjoyed the banter from Monkey and Pigsy and while I felt Monkey was definitely taken for a ride, he was a likable character to Pigsy's comedy relief. It's Trip that was the problem...the most unlikable character in the game.

If you haven't played the game I'll try and be as vague as possible as I'm talking about sections of the game that contain spoilers. Here's essentially my problem with Trip. I empathize with her situation, she all alone and with no one to protect her, "enslaves" Monkey so that he'll help her on her way back home. She needs him to survive. Still it does mean toting her around as quite the annoyance and I ended up disliking her for putting Monkey through all this crap to begin with. However we figure there will be a section of the game where Trip breaks down and admits to Monkey that what she did was "wrong" and gains some redemption as a character for essentially holding another person hostage for their own gain. The problem I have is that this revelation doesn't come until WAAAAAAAYYYYYY too late in the game. Hell I was worried it was never gonna show up but there's a scene earlier on after you reach the ended of Trip's village stage which would have been perfect for this scene to happen. There comes a point where Monkey as fulfilled his obligation and gotten Trip to her village. Something happens. That's when she should have said, "what I did was wrong, I'll let you go" to which Monkey being the dolt that he is would have gladly stayed by her side. Again though, it comes way too late for me to consider her a likable character, forcing Monkey on even further....but that's just me.

Again average game with a decent ending. It would have made for a better animated film rather than the sloppy video game we got. I'd give it a 6/10 if I had to score it. To be fair, average is better than just plain bad though, I could see the quality in the game and it's narrative but I wasn't as enthralled by it as some of you guys were. Different Stroke I suppose.
#ShareonCommunityBlogs
Login to vote this up!