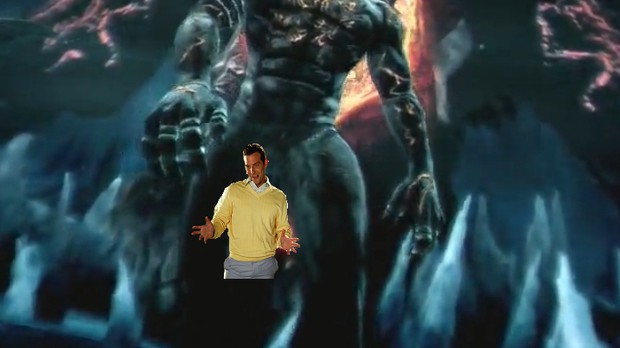 If that's not enough disturbing sexual imagery for you then wait until you see the final boss, Lucifer. Aside from being tough as hell to beat, the Devil is one ugly SOB. Since falling from grace, old Lucy has grown a bunch of horns, some goat legs and a giant dick larger than his forearm. Do you remember how time slows for a second when Kratos counters an attack? Dante has that same skill, but here it feels like a curse. Every time I countered one of Satan's blows his colossal shlong and nutsack flopped up and down in glorious slow motion, producing the most uncomfortable boss fight of all time. When I felled the beast and earned my redemption, it truly felt like a blessing my trial was finally over.

Looking back, Dante's Inferno isn't as terrible as it seemed. The game wasn't nearly as polished as the one it was imitating, but it had some solid gameplay. If I'd have done things a bit differently in the beginning I'd probably sing the game's praises right now. I'd actually recommend playing it if you have the chance, but please don't do what I did.
#OpinionEditorial
Login to vote this up!

I got my gamertag/PSN/Dtoid name from the awesome and hilarious movie Kid With the Golden Arm.

These days I'm big on shooters, racers and action/adventure games but I still enjoy some classic platformers and beat-em-ups. As a general rule I hate RPGs but there are a select few I really like.

Handhelds: Ahead of its time

Updates from my Flixist blog:


Here's a few favorites of mine: