The Next 6 MvC3 Characters (In My Dreams) 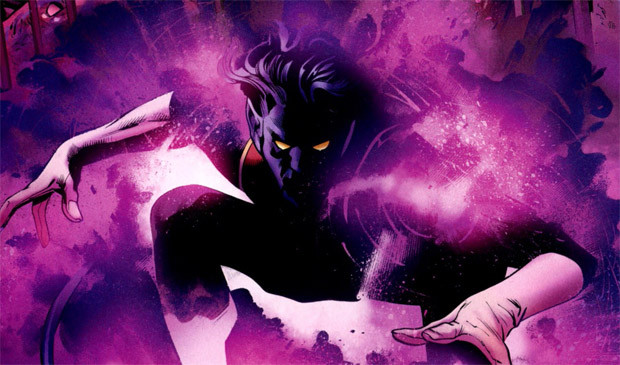 Wow, we finally have an actual hero on the list! Nightcrawler would be such a stupidly great choice for UMvC, I wouldn't be surprised if they actually did him as DLC.

The blue skin, the demonic tail, the 1990's comic purple energy of his teleports, you can't deny that Nightcrawler would be one cool looking MvC character. This is another character I think would translate extremely well into the games art style and rendering abilities.

As a fighter, obviously Nightcrawler's signature teleportation ability would be a huge part of his gameplay. As the premiere example of a teleporter, he would have to have several moves and strategies based off his “BAMF!-ing” goodness. Lighting quick mobility around the screen, follow-up attacks in the air, and the ability to constantly close the gap on the opponent and create constant pressure – the little imp would be a beast in the ring.

But lets not forget Kurt's other fine assets. A gifted acrobat, a prehensile tail, and an expert swashbuckler, there is no end to the awesome moves you could give a MvC version of Nightcrawler. Really, I think the main problem of designing him would be managing to incorporate all his amazing abilities without making him over-powered. He would be like a mix of Wesker and Spider-Man, with a little Taskmaster and Jill tossed in for flavor, a very powerful blend! They managed to represent Dante's incredible suite of tools without making him (too) over-powered, so I don't doubt that it could be done.

Nightcrawler is an X-Man which is almost a mark against him. The X franchise is pretty well represented in MvC3. Not only are there several X characters, but most of them reside in the lofty top teir of the roster. Wolvie, Mags, Storm, and Sentinel are some of the best characters in the game and you have to wonder if we really need another X-Men character cluttering up the ranks. Even with this in consideration though, IMO he would have been a much cooler character choice than some of the guys that made the list.


Alright folks, sorry for nerding out on everyone like that. I do realize that a list of fantasy character choices probably isn't the most important thing that could be addressed with UMvC3. I mean, internet nerd-rage aside, putting a sequel out for a game about nine months after release is pretty ballsy. Especially for a genre like fighting games based on multiplayer, making an the purchase far more of a "necessary" thing for those trying to keep up with the game.

There is probably an important discussion to be had there. Did Capcom make its fans pay $60 for a beta release? Was the original roster purposely cut short to pave the way for an expansion? Are Capcom's claims of technical difficulties such as the impossibility of spectator mode or Frank West causing ROM issues in testing made earnestly, or a sneaky way to pad features in the expansion? Is there any kind of moral obligation on Capcom's part, or on fans that don't want to encourage that sort of business practise?

But at the end of the day its not really a discussion I'm interested in having. I imagine we are going to see a lot of groaning and grandstanding out of the SRK forums and EventHubs crowd, and maybe some melodrama akin to the famous L4D2 boycott. Then the game will drop, it will sell more copies than the original, as all boycotts are quickly forgotten, and it will likely play better than the original and include a lot of the features we all want.

It almost seems ridiculous that fighting game fans who have been complaining about neglect and a dearth of titles for almost the past decade are now moaning and whining about having multiple titles a year. Not to mention many other genres, such as sport and racing games, that essentially do yearly updates without nearly half as much new content as UMvC3 is putting out and are regarded as normal.

To me it seems like some of the rage coming out towards Capcom is hyperbole, fanboys and haters trying to make a bigger deal out of something than there really is. The "stop having fun" mentality that seems to inhabit a segment of the fighting game crowd applied in a broader fashion. Me, I would rather have fun. And to me fun can be making up a wish-list of characters I would have liked to have seen in UMvC3.

Oh well, I guess there is always Ultimate Marvel Hyper Edition Turbo to look forward to.
Login to vote this up!