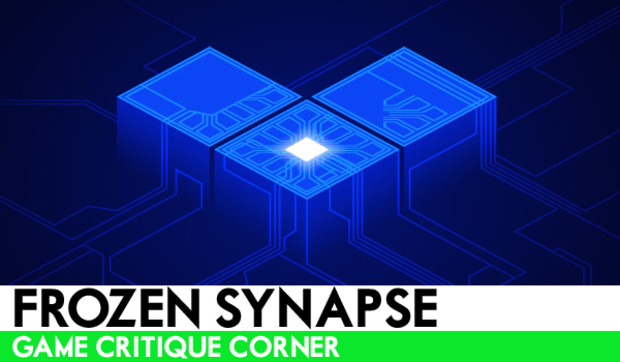 Been a while hasn’t it?

I’ve been busy with Tears In Rain, a secret project and generally everything really. In the mean time I haven’t been playing much in the way of video-games, though I did runthrough Mass Effect 1 and 2 last week to prep up for the third one. I’ll probably pop into Mario Galaxy 2, Prince of Persia Trilogy, Sly Trilogy and expect some more retroactive critique corners. I won’t be picking up Deux Ex because I’m poor and generally not that bothered. I’m not lazy (liar) but I am very busy so deal with the sporadic content over the next few weeks.

Frozen Synapse however has been keeping me on my toes and into the night. Since I’ve been spending my days generally running about being busy and such, I’ve never had some real cool down time, until that is I managed to get gifted a copy of this game by my friend Mr.@FlashJB and generally had a blast with it. It’s been a while since I’ve played a game like this and it finally made me confess something: chess is amazing but I am terrible at it. It’s a game I’m consistently terrible at and Frozen Synapse reminds me of that gut-punching loserface that I always put on.

This is a game which demands you explore every possible opportunity, demands you know (thoroughly) its mechanics and also its entire structure. If you don’t then you will fail, and I have failed, not because I don’t have the patience but because I don’t have the actual drive. I can beat my mates easily but whenever I take on someone above my level then I get beaten in less than three rounds. This is an unforgiving, cold hearted game and it reminds me of all my previous girlfriends. Actually, that’s a double joke, I’ve never had a girlfriend!

Frozen Synapse is a brave game that challenges the player to think and plan and plan and think and the word ‘tense’ doesn’t really do it justice. You can never truly predict what the opposite player will do and, refreshingly, what the AI will do when you’re in a single-player game. This is an unforgiving challenge, but it’s one that demands persistence but eases off of the glorifying victories. This isn’t Mario Kart in which you can spend a minute long cutscene bragging to your friends about winning the cup, this is a game that gives you a badge then kicks you out.

Reminds me again of my previous relationships.

Chess and I have never got along and the same is true for Frozen Synapse and I’ve finally come across a certain game topic I’ve so cleverly avoided for a long while. I’ll be dealing with it in depth with my September Workshop column I do over at The Gamer Studio (all of which can be found here soon enough), but for now, I’ve been provoked into talking about it. The topic is of course difficulty, but rather something within that: the nature of evolving difficulty. See, video-games have been around a longer time I’ve been alive and now they’re only just starting to find their artistic feet.

Difficulty has been around since the beginning of games themselves, but it’s always been player based and constructed around skill, and then the name ‘balance’ was thrown into the bible of gamerkind. Suddenly, AI and weapons systems and generally numbers had to be tailored around difficulty. Normal, Hard, Easy so on and so forth; all of these words meaning an increasing challenge or at least increasingly difficult situations that the player would come across. It’s been argued that difficulty has nosedived in video-games given the new universal appeal and I don’t know how to talk about that.

I’ve finished BioShock over 13 times now, and two of those times I decided to try something unique and was rewarded for it. I built my own difficulty and in both instances I was rewarded: in one I chose Survivor difficulty (on the PS3 version), turned Vita Chambers off and did not save once. I essentially ‘permadeathed’ BioShock on its hardest possible difficulty and I loved it. The second time I decided to go on the Hard difficulty but not use any of the weapons bar the Wrench. Once again, I had a blast, and am eagerly awaiting my courage to grow in anticipation of a Wrench only, no plasmids, Survivor, no Vita Chambers, no gene tonics playthrough.

In one of those instances I was rewarded with a Trophy, a little recognition from the developers, and a nice feeling. In the wrench-only instance I only got the nice feeling, but that doesn’t matter, because I was allowed to create my own difficulty. Call of Duty is a scripted series to hell and back, but BioShock allows in its game design to let you construct your own playthrough. Frozen Synapse however is different in that it goes back in time to largely player-based difficulty based around skill level. I’m not entirely sure what to think of this, I mean, is it better?

The game operates on a less ‘free’ based difficulty, perhaps ‘linear’ is the word to give to it but it doesn’t give it justice. This is chess reborn but it feels much more tense and exhilarating. Procedural generated worlds housing players going at it with cold hard maths battles through tactical based shooting. This is one of the most exciting games of the year and I think everybody should play this, if only to get beaten to shame. It certainly does make me think though: is this the difficulty I want and the short answer is ‘not exactly’. Though that doesn’t mean it’s not welcome…
#ShareonCommunityBlogs
Login to vote this up!