4:16 PM on 08.19.2011 (server time)    0
While normally I love it when a storied game series gets the next-gen anthology treatment, Konami’s upcoming slew of HD compilations has yet to give me the months-long case of consumer blue balls that a gussied up ZoE or Silent Hill really ought to induce. Seriously: extra shiny, uber-definitive versions of some of my favorite games should be triggering at least a smidge of maladjusted fanboy behavior. By all rights, I should be over on Amazon right now, belting out a falsetto rendition of “Snake Eater” in-between ecstatic sobs, compulsively hitting refresh every thirty seconds in case Konami decides on a larf to bump up the release dates by six or so months -- not on Destructoid, whining to you guys as though you’ll read this, start slow-clapping at your computer, and a few small steps from there, ˇRevolucion!

My main gripe is that for a bunch of compilations, the respective Silent Hill, Zone of the Enders, and Metal Gear sets do a really shit job of compiling. A good compilation can either be comprehensive, and include everything in the series, or it can be cohesive, and have some internal logic by which yon handful of games make sense as a single volume. But rather than designing each compilation around the needs of each individual series, Konami seems to be cramming fuck-all onto a blu-ray disc and asking upwards of $40 for it.

Let’s address this game by game… 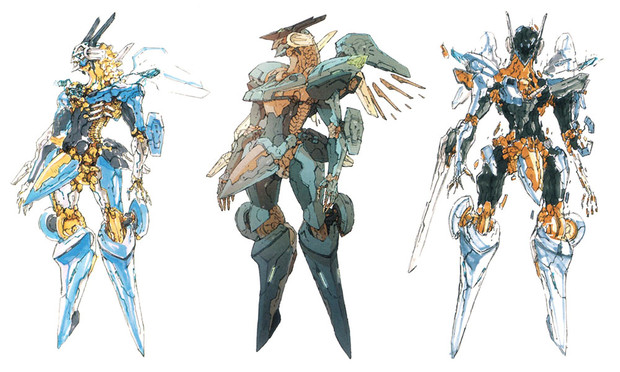 Jehuty did not heed my last caption.

The first game was the rough draft, the blueprint, little Bambi’s first awkward steps before growing into the king of the forest. The giant robot forest. As the second most prominent selling point in a $40 compilation, ZoE1 just isn’t going to pull its weight. The God of War Collection had two terrifically dumb, grandly entertaining action games to its name. The upcoming Ico/Shadow of the Colossus comp brings together Fumito Ueda’s twin masterpieces of atmosphere and understatement. ZoE HD feels a game short of justifying the same price tag these other collections are swinging, which is especially a shame if said game’s existence hinges on how well this comp performs.

And there you have it. How Konami has talked me out of buying spiffed up versions of some of my favorite games. I should probably emphasize that this isn’t a call to arms or a boycott or anything approaching a principled stand, unless my own sense of entitlement can now be considered a principle (pleasepleaseplease). Each of these releases just struck me as being off in various ways, and I wanted to see if you guys were similarly vexed, or if I’ve finally hatched into the kind of gamer so impossible to please that nothing short of a solid gold copy of Chrono Trigger 2 -- one that does your taxes, cuts your hair, vents housebroken puppies from its exhaust ports, can turn you into a bodhisattva depending on which ending you get, and dispenses hand jobs if you talk to it about comic books for long enough, MSRP $14.99 -- will ever be deemed worthy of attention, at least until it’s revealed that Marle’s hair color is different and there’s no trophy support for players who’ve attained enlightenment, because “desire for the trophies would inevitably lead to attachment and suffering, denying the true transient nature of existence and thus prolonging the karmic cycle of death and rebirth”, yadda yadda, freaking ripoff. And no one wants to be that guy.
#ShareonCommunityBlogs
Login to vote this up!