3:37 AM on 08.17.2011 (server time)    0
Hello friends. Another chapter as promised. Four more to go. I didn't have a picture or a reference for Handsome Beast - but later on I have a list of pictures that I need to add to some of the existing chapters, so I'll be trying to update those as we head closer to PAX 2011. Very special chapter. And hmm... I think it is high time we got to the good guys! But that is for next chapter. Thanks for all the comments last time! It was good to see everyone that I remember still alive and kickin'. And very special thanks to my as always wonderful and talented girlfriend Kahla for Elsa's picture!

Handsome Beast stood there unassuming in his suit and tie. He waited there patiently for Virgilio who was just a bit late for his appointment with him. In an alleyway he sat against a wall and smoked a cigarette. It was a cool night and the sunset painted the roads and buildings pink, purple and blue. It wasn�t often that he was able to truly enjoy himself and relax. There was always something going wrong in this god forsaken world he lived in, but not right at this moment. He wondered how it could possibly get better than this.

Virgilio approached and he looked rushed and worried. He strutted over to Beast with an automatic rifle slung over his shoulder. He looked different these days. He sported a red tie and sunglasses. Virgilio looked positively like he was going to come over and slap him. Beast rose his hands up and got ready to put a hand on his own firearm that was currently holstered.

Virgilio stopped and whispered, �Beast, we have to get out � of � here!�

�What? Why are we whispering?� Beast said.

�Elsa is near.� Virgilio pointed in the general direction of where he saw her group. �We have to get out of here.�

�Shit, she�s going to kill us.� Beast said. �Thanks for finding me.�

�We can thank god for me later.� Virgilio said. �Follow me.�

Down the road two people walked towards Anthony. One of them looked familiar. She was just a girl but Anthony thought maybe he had seen her before. The man beside her was Corduroy back from his mission to kill the forest spirit. He remembered his previous encounter with him that had happened long ago. He couldn�t quite get a hold on what Corduroy�s weakness was back then. In one on one combat he could always use some sort of force field to protect himself from weapons. This was before he had returned Corduroy to his previous state. He had almost defeated him in the battle, but he had almost died trying.

Anthony suspected all Corduroy had to say was that he finished the job. As they came closer he started to put together who the child was. It was his long lost love Ashley Davis. It was around two years ago that they lost contact. He wanted to hide Ashley away for her safety before a scheduled encounter with a skilled swordsman, so he changed her into a five year old to hide her identity. He had promised that he would come back to her and bring her back to the same age but it never came to pass.

He had retreated from the battle badly injured. In the time that it took him to come back to find Ashley, she had gone missing. It wasn�t until later that he found out that the attacker was Wolf. Possibly it was he that kept Ashley away, but there she was � only a little older than when he left her. This was Anthony�s chance to bring her back.

�Anthony!� Corduroy said. �I mean her no harm! I found her in the same place I found the forest spirit!�

�You mean everyone harm you bastard!� Anthony yelled.

�My darling! Ashley!� Anthony cried. �Do NOT hurt her!�

�I bring this child safely to you.� Corduroy said. �You have to trust me. Please. I knew when I saw this child alone, that it had been your doing.�

�Why?� Anthony said, carrying young Ashley in his arms. �Why would you do this for me?�

�I owe you my life. You saved me when you could have left me to rot.� Corduroy said. �We�re the bad guys. The good guys are dropping like flies and probably have very little support left. We should be teaming up against them to wipe them out.�

�So, what do you know of your purpose here in the world?� Anthony asked.

�There are things I suspect.� Corduroy said. �I suspect that I do not live a normal life in this world� My life seems special. I feel I�m a part of something greater.�

�Indeed Corduroy Turtle.� Anthony pondered. �Perhaps you are. But if it comes down to you, me, Ashley, and anyone else still alive, I think we might have to duel it out ourselves. We will duel if, in fact, our purpose is to see who stands last.�

�In the end, what does the last man standing get for all his, or her, trouble?� Corduroy looked over at Elsa.

Elsa nodded and said: �It could be that our purpose is to prevent something awful from happening. It could be that there is no purpose. If you ask me, all we really know is that all the people with nano-machine based powers are being picked off to finish out some sort of end game.�

�I love you Anthony.� Ashley said nuzzling him.

�I love you too my darling girl.� Anthony said wondering if she remembered anything. �I will change you back. And everything will be as it was.�

�But,� Ashley pouted. �You said you might have to kill me.�

�You might have to kill me too Ashley.� Anthony smiled.

�I know baby girl,� Anthony said. �But listen. First thing�s first. I have to sacrifice someone to make you better.�

Elsa pointed towards an alleyway just past a few of the buildings. It was sunset now and there was calm warmth in the air. Elsa told Anthony to distract the two people trying to retreat to their left hand side. On one of the twisting roads, Anthony was told to cut them off and wait for her signal.

Anthony ran around the buildings and followed the road they were supposed to be retreating to. Elsa has an amazing sense of direction. They all bumped right into each other and both of the suited men, seeing Anthony, fumbled around for their guns. They saw Anthony starting his ritualistic approach to extracting their youth. He sat comfortably down on his knees and started accelerating their lives.

�Anthony, you don�t want to do this.� Virgilio said using his persuasion ability.

�I � don�t want to�� Anthony stopped the aging process.

�I�m much too handsome to die.� Handsome Beast said.

�Too handsome� Too handsome to die�� Anthony mumbled, hypnotized by the both of them.

They had similar powers and were both completely in control of Anthony�s actions. But Anthony had distracted them enough for Elsa to come down from above and pierce Virgilio�s skull and lodge the blade in between most of his vertebrae. Virgilio froze with his mouth open and a surprised look on his face. Handsome Beast turned and spoke in enough time to catch Elsa�s ears.

�I wouldn�t kill such a handsome dude.� Anthony said.

Corduroy Turtle wound up and smacked Handsome Beast hard in the back of the head with his bo staff. Beast�s neck muscles held together, but the muscles were the only strands of flesh holding on. His spine spilled out in threads. The blood vessels and veins splattered blood in a nova around his feet. His feeding tubes drained of a burrito Beast had eaten just minutes before now, oozing out into what was left of his breathing tube that was making vile sucking noises. The muscles that were still attached miraculously kept his head from falling right off, but Handsome Beast only succeeded in twitching and making squishy noises before his body fell to the ground in a heap of bones and flesh, no longer held together by his will.

�You guys looked like you were in trouble.� Corduroy said, seeing Anthony and Elsa snap out of what looked like a trance.

�Okay, okay.� Elsa said, shaking her head. �Let�s get down to business.�

Ashley walked over and sat by Anthony. Anthony pushed out his hands towards the two freshly dead corpses. Slowly, Ashley and Elsa changed as the bodies turned to ash. Elsa looked at her hands as they turned younger. Her whole body seemed to become hydrated with youth. As it happened, she ran her fingers over her neck and her face. Her breasts were larger and firmer. Ashley grew spontaneously into her proper twenty something age, went through puberty, grew long locks of hair, and developed her mature womanly features. 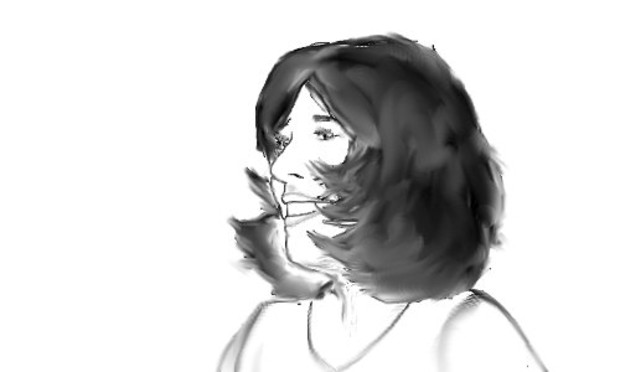 Anthony broke a sweat realizing that Ashley may currently be the most powerful one in the group. With her power, she could potentially wipe out anyone that crossed her. All those years alone she had to fend for herself. It must have been then that she learned how to do it. She was alone, and needed a friend. Her imaginary friends must have come true.