7:40 PM on 08.15.2011 (server time)    0
The PDP Versus Pad was originally available as the PDP Marvel Versus Pad. I feel it's necessary to point that out, because I'll admit that when the pad first came out, that was one of the two factors which made me decide against picking one up. The other, of course, being the expensive $39.99 price tag for a controller for a maximum of four or five games.

I've since discovered that this was a terrible mistake on my part. 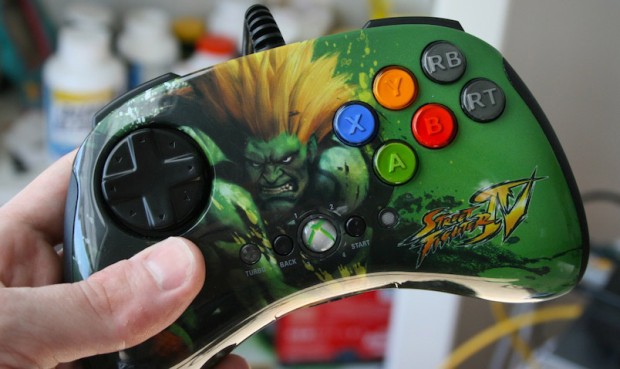 Now, I've heard some people complain about the fact that the controller is designed so that the six-button layout includes the LB and RB instead of the more common RB and RT layout depicted on the Blanka MadKatz fight pad above. To be honest, I can't foresee it being a problem for anyone who plays at home: Just change the settings once and you're good to go. If you can't figure that much out, you're probably not the sort who would benefit from it anyway.

I guess I can see it being a problem if you're the sort who takes their pad to a friend's place to play, presuming there's more than two of you and you're all very specific about your controllers. But if you're that devoted, you've probably got a Hori stick, or a custom Sanwa or Seimitsu stick anyway, so this cheap pad is not for you.

I'll admit that right now, it feels a little light. I don't think it's a problem with durability, (or I hope that it's not), but the controller feels far too lightweight to be comfortable. I'm hoping that this has more to do with the lack of rumble and (for a fight pad) extraneous components like the two analog sticks, but I've got the feeling time will tell on that count.

The bottom line is that if you're spending a couple hours a week playing fighting games and plan to pick up Street Fighter X Tekken, you should probably pick up this fight pad.

I know I don't regret it.
Login to vote this up!