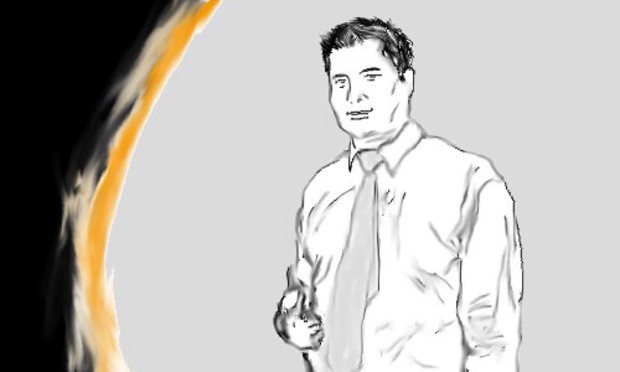 �Crime, please enter.� Fame Designer smiled at his desk, folding his hands together.

He walked towards Fame with a slight hesitation. Crime didn�t know what he really wanted. He didn�t know exactly how things were supposed to turn out. The game Fame built might be a single player game, a multi-player game, a linear game, a non-linear game, or it could even have been a movie, a book, or simply a blog. Crime hoped that he was destined to last until the end.

Crime entered the portal and found himself in an office. Fame Designer sat back in his chair and welcomed him.

�So, here we are again.� Fame smiled. �I�m glad you�ve been enjoying my game, but apparently I have some bugs in it still.�

�Ah, so it is a game.� Crime raised his investigation finger.

�Yes.� Fame said. �And that means you know way too much.�

Fame Designer stood up from his chair abruptly and it was thrown backwards clanging against the wall. They stared at each other silently for a moment. Fame tried to gauge his reaction. Crime stood his ground, flinching only slightly. The air was hot and humid in the room now, and both Crime and Fame formed droplets of sweat on their foreheads.

�Reminds me of Beyamor� This humid room�� Crime said.

�Why is it that everyone is dying Fame? Why design the game to involve so much death?� Crime asked, trembling, while simultaneously asking himself what Fame Designer�s powers were.

�Don�t be so dramatic Crime Minister.� Fame Designer waived his hand, trying to brush off his comment. �It is simple� Be the last man standing and you win the game. The point of all of this was to play the game without our previous memories of each other. We are all a part of this. All of our friends from Destructoid are a part of it, but they�ve had their minds erased for the purpose of living inside this world, and this world alone. Your memories persist. Perhaps your memories led you here to me.�

�But we could have just lived out our lives here without knowing.� Crime said. �What if we were stuck here?�

Fame explained, �There are timers, conditions, and people that will stop the game in the event of an emergency. When the game is over, I will see you on the other side. However, I hope that I can kill you first, so that you do not reveal the secret to anyone else. Although, if you kill me first, I humbly request that you also role-play your part in all this, and refrain from revealing the game�s true nature. There is something� human� about not knowing what the after-life is like. Let them play their parts out. Let them experience this world, for what it is designed to be.�

�And if I win, what happens to you?� Crime asked.

�I wake up back at home and watch over all of you. Fix bugs in the program. And respond to the people complaining that our single player version of the game requires you to be online.� Fame said.

�Single-player online? That does sound kind of stupid doesn�t it?� Crime reacted.

�Damn it.� Fame slammed his fist against his desk. �The idea of single-player online isn�t new. You do it all the time with games in your browser or on other platforms that are online only. It is the perfect way to stop cheating and piracy. There is no way to pirate our game unless someone hacks into our servers, gets our code, and takes the time to figure out how to reverse engineer our code and sync it with our clients. They�d have to run their own servers! They would be paying with their own money! It makes things way too hard for hackers. And why would anyone complain? Everyone has internet all the freakin� time anyway and we are only charging a subscription fee of about a dollar a month.�

�Sorry�� Fame said. �So, it�s your move. I have absolutely no idea what my power is.�

Without anymore thought, Crime roared and shook the room with the power of his voice. Papers flew about and glass lamps cracked and shattered onto the floor. The wood of the oak desk cracked into pieces. Fame Designer squinted at the wind twister of garbage but felt nothing. The sound made by Crime Minister seemed to shudder even the walls of the bunker and the rock enforcing the walls behind it.

Crime Minister felt numb. He had never attacked someone outright and on purpose. Perhaps it was his own ears being damaged, but in the past he had gotten used to such things. Something was different now. He closed his hands around his ears and felt a slippery substance. He began to take his voice down a notch, but upon looking at his hands covered in blood he screamed in fear � louder than ever before.

Fame Designer stood upright and confident in his newly realized power. He walked towards Crime, still screaming in his direction. The closer he got, the more powerful the noise. Crime pushed his powers as far as they could go, but he saw his death coming. Fame caught Crime as he fell. And there was silence. Fame seemed undamaged.

�The waves of energy I produced.� Crime struggled to speak. �It was like they were fed right back into me.�

�I think that is my power.� Fame said. �Whatever damage is done to me is deflected and done to someone else. I wonder what the implica-�

�If you are talking,� Crime interrupted. �I cannot hear you� If your power is what I think it is then you should be careful that it doesn�t go both ways.�