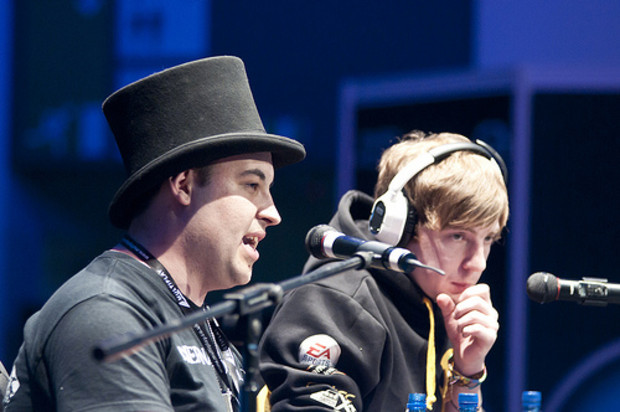 I have nothing personal against Elsa, that would be me being a massive dick, but I do have something against his argument. We're all gentlemen and gentleladies over here at Destructoid, I hope so anyway, so I see the argument and raise you this:

Yes, physical exertion, you'd be surprised actually at just how physical eSports can be. Just quickly Google "carpal tunnel Starcraft 2" and you get thousands of results. All games require some showing of physical prowess in some way: whether it be reactionary or skill based... reminds me of a few sports actually. Regardless, sport is indeed tied to physical exertion but also skill.

I feel ALL sports require both skill and physical ability, eSports included,

"but really, honestly, would they pay money to attend??" - from Elsa's article.

Again, I don't want to nitpick and be a dick, but eSports is the fastest growing sub-culture of our culture and given we already have casual cultures and giant MMORPG communities I feel video-games are probably more special than a lot of us think. People may massive amounts of money to go to these events, advertise at these events, even enter these events and so on and so forth. Because it's like any other sport: there to support and cheer and hang out with friends.

Wikipedia says games a form of sport and while I don't trust them 100% of the time I trust them on this.

Competitive gaming and eSports are exactly the same, by the way, the difference being that people can actually watch eSports. They can gather around and build communities and forums and discuss and just enjoy video-games. The definition of 'sport' has changed so much over the past few centuries given the rise of technology and I for one wholeheartedly accept any new change. Maybe it's because I'm a liberal scumbag or maybe it's because of something else.

A person who is proficient in sports and other forms of physical exercise.

I completely agree, see this fits eSports perfectly. The reactionary exercise of Starcraft 2's 'adapt to survive' gameplay fuels into Team Fortress 2's FPS reactionary exercises, the same goes for any first-person shooter really. Sports does not mean being strong and handsome and able to jump anywhere, I wouldn't demand a ping pong player to pole vault and I would ask Nerchio to go tango with someone on Motorstorm Apocalypse.

"Gaming is gaming. Get over it. There is no need for gaming to be "sports" and the people that play games professionally are not "cyber athletes", They are gamers. Period." - From Elsa's article again.

We have teams, we have players, we have athletes, we have communities, we have T-shirts, we have tournaments, we have all manner of 'sporty' things. Competitive gaming has evolved with the times, it has become a sport. Not a traditional one, but we have the capacity to be a different medium than any other medium. Yes, I batter on about how games are meant to realize their full potential but I didn't just mean artistically but culturally.

I for one support any positive movement that video-games bring: eSports brings us more positive coverage from the media, it gives us more money to channel into developing communities, it grows our audience and it shows off great games being played by great gamers. We are all gamers here but some of us have the skill and the physical power in order to make that go beyond a simple hobby and love, but to become a job. The fact is the more we doubt eSports as a 'sport' then the less credible the argument will be for them to be taken seriously. You wonder why 'ludology' isn't called 'game studies', or why the new word for stories is 'narrative'? We're a young, young medium and maybe later we can shed our skins and go back to 'video-games' but for now we're right in these shifting times in which anything can happen.

Games are games, but some games are sports.

And there is nothing wrong with that at all.
#ShareonCommunityBlogs
Login to vote this up!