1:11 PM on 08.05.2011 (server time)    0
Note, the interviews will continue having an irregular schedule for a few more weeks until I feel ready to handle a wave of interviews for the next season, but I promise you the next season will be wild. The Real World Destructoid wild.

Also, in case some of you are wondering, I have about 7 different templates for questions and I mix and match different questions for every series of interviews so some old random questions re-emerge from time to time.

First, a basic question. Why did you start blogging? And why here specifically?

Well I originally started as a lurker, just like everyone else. Everyday I would read the front page stories and pass by the blog highlights. I never thought I would be noticed for my thoughts, seeing that there were so many other great bloggers. I decided to finally crawl out of the forums after being there for a few months and decided to give it a shot when I was seeking sketch ideas for class. That was my first ever shitty blog. I then kept coming back, determined to one day be highlighted or maybe even featured on the front page.
As to why here specifically, well, I have never really been part on an online community. My first ever "community" was over at the Adult Swim forums. That place however just turned into Anime discussions and random shit. I stayed there for a few months before my friend introduced me to Destructoid. I haven't really ever felt at home until I read through other blogs. The same people kept appearing and actually seemed to care what other people had to say. Since then, I can't imagine my life away from Destructoid or it's community.

Mr. Brightside
I know it's more than one word but it really is the closest I could think of. Fun Fact: That was originally going to be my gamertag but alas, it was already taken.

Where did you get your name and avatar?

The name Super Monk is my first successful comic book character that I drew during high school. He is basically a Monk in an orange jumpsuit that got super powers from a radioactive doughnut. What powers you ask? Welp, my original premise was that he could leap one building in one fart and has the strength to open a can of pickles without straining himself. Pretty much, he can fly with his flatulence and has super strength. On top of that he curses, drinks, fights... pretty much things no normal Monk would do.
My current avatar came from an awesome wallpaper ChillyBilly showed me. Since I love Mortal Kombat and Sub Zero, I thought it was awesome.

Damn... I don't think I have one particular game that I love more than another. However, if I have to choose one game, I would have to go with Rock Band 3. I have spent hundreds and hundreds of dollars on that series alone. On top of that, I have beat the endless setlists in all three Rock Bands. I even earned the achievement "Bladder of Steel" which makes you play the endless setlist on RB2 without pausing of failing... that took about five hours to get through. After that my brother lost his voice (He was the vocalist) and my hand, along with my arm, were throbbing (I was the Guitarist).

If you could punch anyone here on dtoid, who would it be and why.

I generally love "almost" everyone on Destructoid but for some reason... I wanna punch Max Scoville right in the dick. He just rubs me the wrong way, I watch the Destructoid show from time to time and I follow him on Twitter yet I heavily dislike him. He might take it like a man... or maybe LIKE A BITCH! SEE WHAT I DID THERE?!

If you could hug anyone here on dtoid, who would it be and why.

I would hug the shit out of ChillyBilly and GarethxxGod. They were some of the first people that took me in and made me feel like I was part of the family here. Night after night, we have chatted and played games with each other. I would not trade some of those moments for anything else in the world. I would also hug Mr Andy Dixon, Corduroy Turtle, Law of Thermal Dynamics, Knutaf, Jonathan Holmes and of course Niero.


If I were to tell you that you have one more day to live, what would you do.

I am generally a boring person, so it would just be another day probably. I wouldn't tell anyone and just take my family out and spend my final hours with them. I would take them out to eat, a movie and whatever else they wanted to do. Then in the final hours, I would just hang out with my brother.

Everybody has got trouble in their lives. How did you deal with yours?

Well... I have always believed that the best way to take a situation is from a positive side. Even if I got wronged in the situation, I will be understanding and calm. There have been multiple times where people ask if I am okay because I never, ever let anything angry come out. The one time I let some anger out, I turned into someone else completely. So instead of venting, I just put on a smile and keep it all bottled up. It may explain why I have not fit in with groups and it may explain why I am so awkward but that is just how I am. I know it probably isn't healthy but I just wanna seem like a guy that is approachable and is "normal". As I like to say I never fight the current, I just go with the flow.

When I grow up I want to be…

My original idea as a kid was to be a cartoonist. To bring my characters to life and have them loved has always been a dream of mine. Now however... I'm not really sure what I want to do. I do know however that I wanna eventually be a great father and try my damnedest to make them a geek too.

Now that I’m old I can finally…

Do whatever the hell I want. Thing is... I have no idea what to do with that freedom. Haha

You get so many packages…why?

It started with Occams asking if I wanted one of his Cthulhu figurines and since then I have received packages from ChillyBilly and GarethxxGod. I cannot express how grateful I am whenever I receive a package. Within hours of the delivery, I try to get a blog up to show how grateful. Seriously guys, if you are reading this, thank you. I would send you all something, and I will eventually, but I sadly have nothing to really send. One day though... One day...

Where would you most like to travel or go to (events in time maybe?) and why.

I'm not really a big traveler but I would love to visit New York one day. There's something about big cities that I love.

As much as I say fuck, my favorite curse word is... shit. There's nothing like running from a huge enemy and yelling shit over and over again.

There is a flattering picture of you online…want to talk about it?

Well, the picture originally came from a session of Rock Band turned wrong. There was only one girl and four guys, so she thought it would be "fun" to dress up and play. She dressed as a "red shirt" from Star Trek while us guys... were forced to wear something else. I think the picture truly speaks for itself. 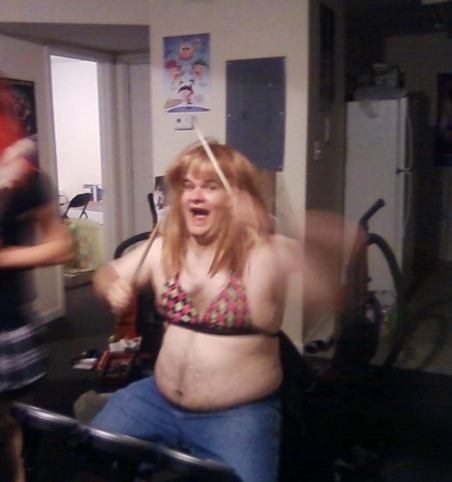 You have an outstanding record as being one of the better videogamers, completing challenging games within days and kicking other people’s asses in fighting games. What is the one game that has given you the most trouble in recent memory? /trollface.

As you all know, Catherine recently released. I wasn't really anticipating the game at all until the demo released. After playing that, I pre-ordered it the following day. Then... the game released. I picked it up as soon as my local GameStop opened, where I was the only person that pre-ordered it. I drive home frantically and pop the disc in as soon as I get home. When selecting the difficulty, I chose normal. A warning message came up saying that it was for "experienced players" only. I laughed and said with confidence "You have no idea who you are talking to!" and accepted. Well around night five, I hit a wall. I could not see a path at all up. I raged hard, which quickly turned into my first ever rage quit. Shortly after, fellow Dtoider Law of Thermal Dynamics made this shirt for me.

What do you get when you cross an owl with a bungee cord?

Something I would not want to wake up next to.

Eh, I have nothing really to confess but I can share a pretty embarrassing moment. Some of you might not know this but I currently am a server. Well, one day I gave a table back their change and instead of doing the usual thank you, I thought I might say something else to mix it up. So I tried to say "Have a nice day" but it came out as "Have a nice gay".

If you could ask me or the community a question what would it be?

What is one of your favorite games that isn't appreciated by the mass as much as it should be?
Login to vote this up!