In The Grim and Dark Future, There Are Only Low Sales 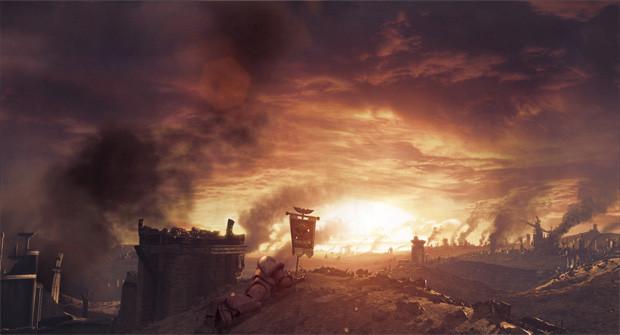 About as barren as the summer release schedule

In fact its such a wide open field I can't fathom why a developer wouldn't want to drop their fun-and-exciting, franchise backed, action-shooter in the middle of it. You know, instantly becoming the star of the Summer and receiving an abundance of coverage from content-starved news outlets. Not to mention releasing before they have to compete with the industry equivalent of a Star Destroyer.

The preview I watched of Space Marine earlier today looked 100%. Gameplay was tight, all the art assets were in place, even achievements were popping up, which makes me think the game has gone gold or is damn close to it. So why sit on it till September? Are sales really that bad in the summer? Is this a fact or just an industry myth?

I've heard some theories on why the summer is always so dull. There is some economic vodoo I don't understand that encourages companies to release near the end of a quarter because it drives up share prices for some reason. Or the old stand-by that games are not released in the summer because people are outside enjoying the sun and fun rather than playing games.

I don't buy it. Sure I've been enjoying the summer, but its not like I tossed my consoles out the window. I'm still playing and buying games, and I bet the majority of gamers are too. Just look at Microsoft's slick handling of their Summer of Arcade feature. To my understanding, Microsoft pretty much decides when something gets released over its service. Rather than suffer through a trickling revenue stream over the summer season, they got crafty. They gather a few promising XBLA games together, release them over the course of the summer, promote the hell out of them, and walk off with mad bank.. Summer of Arcade has been a huge success for them, helping them sell even some quirky indie games that might not have appealed to such a wide audience if more competition had been present.

How many times have we seen solid games go up against huge triple A releases and get stomped for it? To beat a few of my favourite dead horses I'll just point to Alan Wake and Blur trying to survive next to Red Dead Redemption. Vampire the Masquerade: Bloodlines up against Half-Life 2. Or the esoteric but well spoken of Eternal Sonata, which disastrously released its North American version in the crowded late schedule of 2008, a move a lot of fans say killed an otherwise promising looking game. Considering they could have chosen to release the localization at any time, you have to wonder what they were thinking going up against Call of Duty: World at War and GoW2 (although to their defence they were chasing a fairly different demographic).

I'm sure there is a reason for it. Some business thing I don't understand. But I am still baffled when respectable cool looking games choose to go up against titans. Are they afraid to admit that their game isn't a triple A property? That isn't a crime! In fact, sometimes its a nice refreshing change of pace from the latest 5th sequel of a monster franchise or this years iteration of an on-going series.

I wonder what the developers think about their publisher's handling of their perilous release scheduling. Are there internal arguments about it? Why aren't publishers more attentive to potentially ruinous competition? I know that if I was running a company and saw that my product was targeted to come out at the same time as some massive property I couldn't hope to compete with, I'd move my schedule around and give it some breathing room. You can call it a pussy move if you like, but I'll have a tough time hearing you over all the money made by releasing at the right moment.

When you take the two ideas together, its especially galling. On one hand you have a solid but low-recognition games trying to cram themselves in to the over stuffed September-to-December holiday season, racing to a forgone conclusion of disappointing sales. And on the other you have the vast waste-land of late May-to-August totally devoid of all gaming life, just waiting for something to drop. Am I the only one seeing a solution here?

Like I say, I don't get it. I'm sure there are great reasons why there is no action in the summer and why mid-tier games take suicide runs against Halo and CoD, but I'm out of the loop. If you have any ideas, please let me know.

I hate to see whats going to happen to Warhammer: Space Marine, its like a car crash in slow motion. I hope I'm wrong. I hope Space Marine turns out to be as fun and cool as it looks and sells a bunch of copies and finally brings the 40K universe to my domain and everything is groovy, but I'm not placing any bets on it.

In the Grim and Dark future, we all save our money for GoW3.
#ShareonCommunityBlogs
Login to vote this up!